New York Times: The dangerous struggle between the leadership of Iraq and the country’s Kurdish minority intensified Friday as the Kurds seized two oil production facilities in Kirkuk Province and the prime minister appointed a temporary replacement for the foreign minister. The ethnic tensions escalated at the same time as reports surfaced of more sectarian violence, notably abductions and killings of Sunnis in central Iraq, and two bombings in Kirkuk. 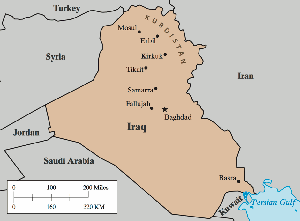 BAGHDAD — The dangerous struggle between the leadership of Iraq and the country’s Kurdish minority intensified Friday as the Kurds seized two oil production facilities in Kirkuk Province and the prime minister appointed a temporary replacement for the foreign minister.

The ethnic tensions escalated at the same time as reports surfaced of more sectarian violence, notably abductions and killings of Sunnis in central Iraq, and two bombings in Kirkuk. A report released by Human Rights Watch reported that 255 Sunni prisoners had been summarily executed. The Iraqi government called the report “unfair and inaccurate.”

The oil production facilities in Kirkuk Province, on the border of the Kurds’ semiautonomous region in the north, were seized by Kurdish pesh merga forces at dawn Friday. The complexes were previously run by the government and had a primarily Arab staff. The Arab employees were asked to leave, according to Iraq’s Oil Ministry and witnesses in Kirkuk.

“These two are among the main wells producing oil in Iraq,” said Assam Jihad, the Oil Ministry spokesman. “They are the spine of Iraq’s oil wealth and produce 400,000 barrels a day.”

Oil industry publications said they had produced a little less than half that in recent months, but nonetheless represent a significant share of Iraq’s oil production. In 2012, Iraq produced on average of three million barrels of oil per day, according to the Organization of Petroleum Exporting Countries.

“Half of this production goes to the local market, and the other half goes for export,” said Mr. Jihad, criticizing the Kurds’ seizure of the field as a “constitutional breach” and “violation of Iraq’s sovereignty.”

In Baghdad, Prime Minister Nuri Kamal al-Maliki, a Shiite, replaced the foreign minister, Hoshyar Zebari, a Kurd, with Hussain Shahristani, a Shiite from Mr. Maliki’s bloc. Mr. Maliki was responding to a decision by Mr. Zebari and other Kurdish cabinet members to boycott cabinet meetings in protest of Mr. Maliki’s searing criticism of the Kurds this week.

In a televised address on Wednesday, Mr. Maliki charged that the Kurds were harboring Sunni militant opponents of the central government.

The replacement of Mr. Zebari infuriated the Kurds, but several Kurdish officials said it had solidified their resolve to move ahead with the constitutional procedure to select a new Iraqi government, including a president, prime minister and Parliament speaker.

“With this step, the prime minister doesn’t leave any room for power sharing,” said Faleh Mustapha, the foreign affairs minister for the Kurdish regional government — a separate position from that of Iraqi foreign minister. “Had our ministers resigned from the government, or if we had withdrawn entirely from the government, it would be different, but we are still participating in the political process,” he said.

Iraq currently has a caretaker government because of delays, first in finalizing the election, and then because lawmakers have been unable to agree on candidates to fill the top positions. Although it is not stated in the Constitution, the speakership typically goes to a Sunni, the presidency to a Kurd and the prime minister slot to a Shiite. Each group has a number of factions that first must agree on a candidate, and then ensure that the candidate has at least the tacit approval of the majority of the members of other groups.

Parliament is scheduled to try again on Sunday to name a speaker, which would be the first step toward forming a government. Under intense pressure to do so, the lawmakers appeared likely to hold a meeting. But since each group is waiting for the other two to present candidates, it was not clear that there was enough trust to go forward.

More details emerged on Friday about the kidnapping of some 30 farmers near Balad in Salahuddin province. The farmers, many if not all of whom are Sunnis, appear to have been abducted by a Shiite militia when they came to a roadside wholesale market where they sold summer vegetables, according Mahmoud al-Tamimi, whose brother Saleh was taken on Thursday.

He said that about 30 men were abducted Thursday and 25 on Wednesday. “He has two wives and seven children,” said Mr. Tamimi. He added that he did not understand why the militia had singled out his brother and other villagers. “We fought against ISIS and expelled them from our area,” he said, referring to the Islamic State in Iraq and Syria, the militant group that swept across northern Iraq in June and which is in protracted battle with the Shiite majority Iraqi government.

He said he believed that the militia carrying out the kidnappings is Asaib al-Haq, which has links to Iran and helps maintain security in the nearby town of Dujail, which has a significant Shiite population.

“They kidnapped six of my cousins. I do not think they will kill them,” Mr. Tamimi said. “They will just demand ransom; before they asked for two million Iraqi dinars,” or about $1,700.

The Human Rights Watch report documented five instances between June 9 and 21 of what it said were mass murders of Sunni prisoners by the Iraqi security forces or people who worked with them. The killings occurred in Mosul, Tal Afar, Baquba, a town near Baquba also in Diyala Province and in Rawa in Anbar Province. In some cases, detainees were shot in their cells. In one case, grenades were thrown into cells, according to witnesses and even some government officials. In most cases, the executions coincided with attacks by ISIS at or near the prisons.

The Iraqi government denied the accusations. “All accused people are innocent until proven guilty, and what happened to prisoners in Baghdad and Hilla and Salahuddin was carried out by insurgents, not by security forces,” said Saad Maan, the spokesman for the Baghdad Operations Command.

Omar al-Jaworky contributed reporting from Baghdad, and an employee of The New York Times from Kirkuk, Iraq.

By Jubin Katiraie During the month of September in...

Sunday Times: Iraq's most wanted terrorist has fled the...