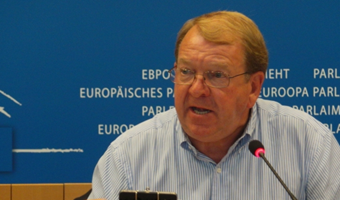 Bold changes in Iraq, including eviction of all “Iranian proxies” who have “contaminated” Iraqi politics and the Iraqi economy, are needed to prevent the country from falling into darkness, argues Struan Stevenson of the European Iraqi Freedom Association.

The following is the text of his article on Thursday in The Huffington Post:

Can Abadi’s Reforms Save Iraq?

A massive protest rally organised by Muqtada al-Sadr, the firebrand Shi’ia cleric, took place again last Friday around the Green Zone in central Baghdad, Iraq. It was the most recent in a series of rallies that have involved hundreds of thousands of al-Sadr’s supporters protesting against corruption at the heart of the Iraqi government. Initially, al-Sadr had intended to lead his supporters, mostly from the deprived Sadr City suburbs of Baghdad, in an outright invasion of the Green Zone, which he decries as “A bastion of support for corruption”, but he climbed down from this position last Friday and instead ordered his followers to undertake a sit-in around the perimeter. Nevertheless, thousands of angry protesters cut through the razor wire, which protects the outer boundary of the Green Zone and pushed their way towards the security checkpoints that surround the compound, home to leading government ministers and foreign embassies. Armed military personnel and police not only failed to stop them, but in many cases were seen to join the protesters, perhaps sympathising with their call for an end to venal corruption.

Al-Sadr is demanding the replacement of the Iraqi cabinet with ‘technocrats’ whom he says will be more answerable to the people. He also demands the complete reform of the heavily politicised Iraqi judiciary and the root and branch reorganization of Iraq’s financial institutions and banks, which he claims are immersed in rampant corruption. By declaring that the protestors should only carry Iraqi flags and no other emblems, al-Sadr paved the way for the participation of other dissidents and the demonstrations have now grown in size as the Sadrists have been joined by ordinary members of Iraqi civil society, fed up with corruption, poverty, repression and injustice.

Muqtada al-Sadr is pushing at an open door in terms of Iraqi public opinion. The Iraqi Commission of Integrity (CoI) told the Iraqi Parliament last year that Abadi’s predecessor as Prime Minister – Nouri al-Maliki, stole a staggering $500bn (£327bn) during his term in office between 2006 and 2014. This was corruption on an industrial scale. Iraq is now considered as the most corrupt country in the Arab world and in the top ten most corrupt countries globally, according to Transparency International. The main focus of the protests around the Green Zone in Baghdad and also in Basra and other major Iraqi cities has been a general outcry against the failure of the government of Haider al-Abadi to tackle the situation effectively. Many Iraqis wonder why, after more than 550 days in office, Abadi has not ordered the arrest of Nouri al-Maliki who still maintains huge power and influence in Iraq. Abadi sacked Maliki as vice-president in August 2015 as part of a wider reform package. But still the Prime Minister has failed to order his indictment for corruption or even for crimes against humanity connected to the lethal genocidal campaign Maliki launched against Iraq’s Sunni population. On the contrary, Maliki continues to finance a private army carrying out deadly attacks on unarmed Sunni civilians.

The irony is the fact that this anti-corruption campaign is being led by Muqtada al-Sadr. As leader of a major parliamentary bloc, al-Sadr was responsible for the nomination of several prominent government ministers who turned out to be abject failures and every bit as corrupt as the rest. Indeed his parliamentary bloc has made little progress towards the introduction of meaningful reforms. Many people now believe that al-Sadr, who lived for many years in Iran and has had a close relationship with the Iranian regime, is exploiting this opportunity to re-invent himself as the champion of honesty and integrity in Iraq. In his new guise as a moderate, tolerant, nationalist politician, rather than a warlord, al-Sadr even occasionally denounces Iranian interference in Iraq. Nevertheless he still commands a heavily armed militia called the Peace Brigade and leads a populist grass-roots movement, which garners its support mostly from the poor. As a result he has now made formidable enemies both inside and outside of Iraq; but his ability to muster hundreds of thousands of supporters during his recent bout of Friday protests has sent a strong message to his adversaries….this is not a man to meddle with lightly.

Today there is no doubt that unless some radical political and economic reforms are implemented in Iraq, the country will fall into darkness; the defeat of Daesh will be much harder to achieve and even if they are eventually crushed, the future still looks bleak. Bold changes are necessary and top of the list must be the eviction of all the Iranian proxies who have contaminated Iraqi politics and the Iraqi economy. Nouri al-Maliki must be arrested and his corrupted judiciary kicked out. Haider al-Abadi has intimated that he will shortly announce the sacking of nine ministers and their replacement in a major Cabinet re-shuffle. This will be the first tangible sign of his willingness to spearhead the kind of courageous reforms that Iraqis are crying out for. But he will also need to re-build strategic ties with Iraq’s Arab neighbours, who were driven away during the 8 years of repressive rule by Tehran’s puppet Maliki. Abadi will need to convince the EU and USA that the Iraqi government can be trusted; only in this way can Abadi leave behind a legacy of value to Iraq. With Muqtada al-Sadr banging on the gates of Baghdad’s Green Zone, Abadi dare not falter. If he hesitates or shows any sign of weakness, the consequences for Iraq will be dire.