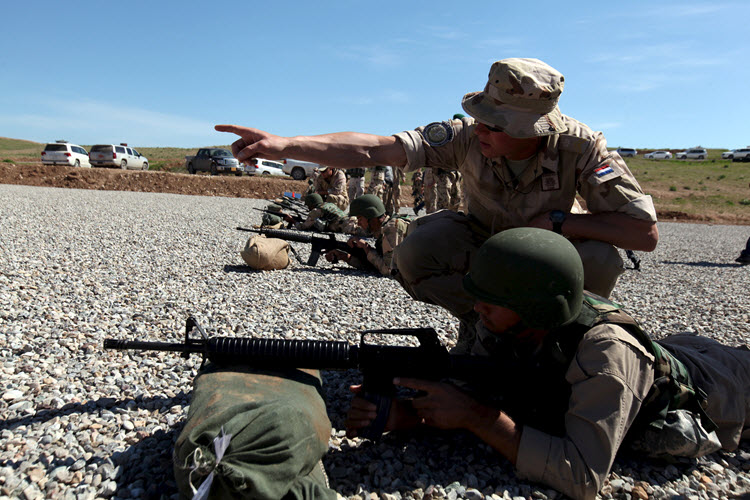 London, 30 Aug – The US must provide aid in the Middle East following the removal of ISIS to prevent Iran from seizing power and further destabilising the region, according to an ex-CIA operative.

Frank Archibald, who was Director of the National Clandestine Service an assignment in which he led all of CIA’s operations worldwide, wrote an op-ed for the Cipher Daily, in which he assessed the liberation of Mosul presented the US with an opportunity to stabilise the region and challenge the Iranian Regime.

There is a tough fight ahead for peace in the Middle East, as acknowledged by Lt. General Stephen Townsend, the senior U.S. Commander in Iraq, as he congratulated the Iraqi government for their victory in Mosul.

Archibald wrote: “The preservation of hard won battlefield victories against ISIS requires non-military measures to stabilize Iraq. Ensuring security, rule of law, good governance, the return of displaced persons, and economic development in Iraq will be the foundation of preventing the resurgence of ISIS or whatever its successor looks like.”

He quoted a review by the Rand Corporation into the Iraqi Government’s efforts (supported by the United Nations and the Coalition) in stabilising their country and providing humanitarian aid, which was overwhelmingly positive.

Archibald wrote: “These Iraqi successes are a solid foundation for the hard work ahead of building responsive, inclusive government at the provincial and national level.”

However, it will also be necessary to remove the Iranian Regime’s influence from Iraq as the mullahs’ current exhibit a lot of economic, cultural, and political influence over Iraq and wish to establish a land route to Lebanon through Iraq and Syria.

Qassem Soleimani, the Commander General of the Iranian Revolutionary Guard Corps (IRGC) recently said that Iran wants to turn the Iraqi Army into a Hezbollah-like force.

Archibald warned: “[This] would be a major destabilizing factor in the region.”

So in order to ensure that Iraq does not become an Iranian vassal state, the US must add a political, social, and regional barrier, especially with the Iraq elections coming up next year.

Archibald wrote: “One election will not dissuade Iran from trying to achieve its objective of making Iraq a vassal state. Increasing and sustaining assistance, pre- and post-election in Iraq will, however, make Iran’s efforts to dominate Iraq more difficult. An effective, responsible, independent government in Baghdad that serves all of its citizens will pose a strategic counterweight to Iran.”

The good news is that two senior members of the Donald Trump administration, Secretary of Defense James Mattis and National Security Advisor H.R. McMaster, have vast experience in Iraq, but the bad news is Donald Trump’s proposed budget cuts to the State Department and Agency for International Development (AID).

Archibald wrote: “Congress has already signalled its displeasure with these radical cuts. It remains to be seen how the budget will be reconciled, and how much and in what areas State and AID take cuts. Irrespective of how the overall U.S. government budget is reconciled, setting aside sufficient funds and providing program authority to the appropriate government agencies to assist and enable an Iraqi government to stabilize Iraq by being a good government for all of its citizens will be money well spent.”

He concluded: “None of the above will be easy. There will be setbacks. To miss this moment of opportunity is, however, to cede to Iran a windfall it did not earn and permit the expansion of Iranian power in the Middle East. It will also condemn the Iraqi people to become vassals of the regime in Tehran; a fate they do not deserve.”