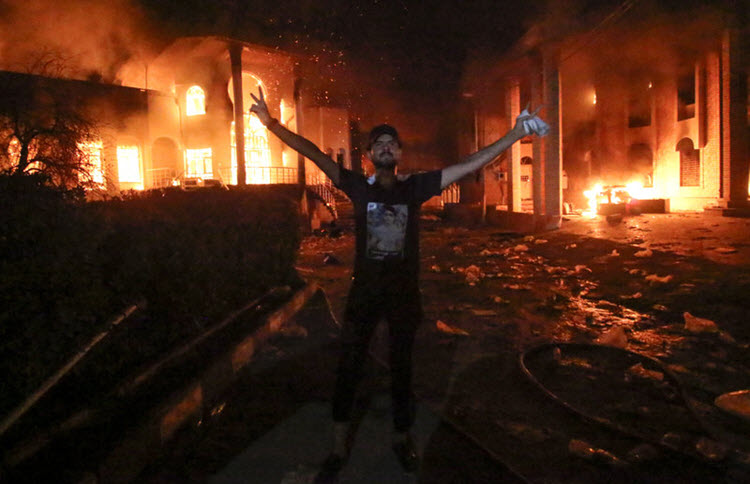 London, 10 Sep – The Iranian consulate in Basra, Iraq, was set fire to by anti-government protesters on Friday, shouting “Iran, Out”, after a week of demonstrations in the southern city turned violent.

Despite the 100+ degrees Fahrenheit temperatures, protesters were calling for an end to Iranian influence in the country, criticising the Iraqi government’s dysfunction, and demanding more jobs and better public services.

Thousands of residents in the oil-rich region are living in poverty, have grown sick from contaminated water, and have suffered power outages.

Lukman Faily, a former Iraqi Ambassador to the US, said: “On paper, Basra is one of the richest cities in the world in relation to the production of oil. In reality, people don’t see the wealth. They see their integrity in question as a result of government inability to provide basic functions.”

He explained that the problems are driven by corruption, incompetence and lack of political will to solve the problems.

He said: “It’s a structure and culture of failure. Add them up together and you get what you have now…The key question is; will the protests stay in Basra or spread elsewhere?”

These are the same problems being faced by the Iranian people, who are in the midst of an uprising against the mullahs, and is caused by the Iran’s interventionist policies, which have allowed them to take control in Iraq and divert funds away from helping the Iraqi people and towards funding militias and terrorism.

Earlier in the week, the protesters burned the offices of Iran-linked militia Asaib Ahl al-Haq, an Iran-backed political party, and the city’s provincial government headquarters, whilst blocking access to the Umm Qasr port and creating roadblocks on the highway from Basra to Baghdad.

At least 10 protesters died when security forces opened fire on the crowds, according to medical officials and activists, but Iraqi Prime Minister Haider al-Abadi said that he instructed the forces to use blanks and that an investigation is underway.

Meanwhile, the Iranian Ministry of Foreign Affairs has blamed the Iraqi government for “security oversight” that led to the attack on its consulate and called for the protesters to face the “maximum penalty”, according to the Iranian Government’s Press TV.

Of course, it should be noted that the protesters have a legitimate anger towards Iran and its interference in Iraq, as many people across the Middle East have against Iranian interference in their own countries. The only way to make sure this doesn’t happen again is for the Iraqi government to expel Iran from Iraq and for other nations to do the same.

Quelling the protesters is not only a foolhardy idea that won’t work, but it doesn’t address the real problem, which is the Iranian mullahs.

Reuters: Iran appeared to take a harder line in...