News Blaze: A group of cross-Party MPs on Tuesday urged the British government to cut ties with the Iranian government and support the democratic opposition to bring about regime change. 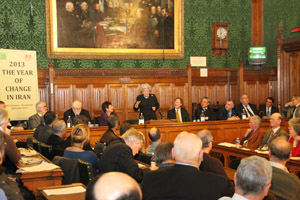 A group of cross-Party MPs on Tuesday urged the British government to cut ties with the Iranian government and support the democratic opposition to bring about regime change.

At a meeting of the British Parliamentary Committee for Iran Freedom in Committee Room 14 of the House of Commons, the MPs and Peers reiterated that the Tehran regime’s nuclear weapons projects and meddling in Syria and Iraq made it the greatest threat to international peace and security.

The Parliamentarians condemned the recent spike in public executions and barbaric punishments including amputation of limbs which they said was intended to spread fear and frighten anti-government protesters in the lead up to the June ‘elections’.

Tahar Boumedra, a senior former United Nations official in Iraq, told the meeting that the head of the UN Assistance Mission for Iraq (UNAMI) Martin Kobler had been cooperating with the Iraqi and Iranian regimes to suppress members of the main Iranian opposition group People’s Mojahedin Organisation of Iran (PMOI / MeK) in camps Ashraf and Liberty, Iraq. Kobler had sanctioned the transfer of the 3,300 dissidents from Ashraf to Liberty in 2012 despite knowing of a UNHCR report which disapproved of the humanitarian conditions at the camp.

Baroness Boothroyd, the former Commons Speaker, said: “In Iran we are facing a rise a public hangings, torture and execution of prisoners on bogus and unsubstantiated charges, the imprisonment of lawyers for doing their job, persecution, torture and killing of journalists, bloggers, and activists. These are all signs of the demise of a desperate regime which has ruled by spreading hatred over the past three decades”.

“Since 2009, the majority of political prisoners executed by the regime have been affiliated with the main democratic opposition movement, PMOI, as the regime fears the organisation’s capacity to foment unrest and organise protests. In view of the regime’s complete disregard for 58 UN Resolutions and given that the regime has denied access to various UN Rapporteurs for the last seven years, it is essential for the Iranian regime’s human rights dossier to be referred to the UN Security Council for binding measures”, said conference chairman David Amess MP.

Lord Maginnis of Drumglass said: “Many years ago Mrs Rajavi told us that we can only deal with this regime through supporting the Iranian opposition and the Iranian people’s democratic ambitions. How true her words now seem. War is not an option, nor is continual appeasement of this regime. Let’s once and for all turn to the Iranian people and their opposition movement and welcome them as the true representation of Iran. Support them and the future for Iran will be bright and prosperous”.

In a message to the conference, opposition leader Mrs Maryam Rajavi said: “This religious fascism is denying the Iranian people their fundamental rights and the benefit of better economic and cultural relations with the rest of the world including the Western world. It is for these reasons that the Iranian Resistance has always insisted that “regime change” is the only solution, and the key to change is in the hands of the Resistance. All other means to deal with the regime and its export of fundamentalism have failed”.

“The Iranian Resistance, due to its deep roots inside Iranian society and because of its democratic program for the future of Iran, is competent to direct the developments towards regime change”, said Rajavi, President-elect of the main opposition coalition National Council of Resistance of Iran.

The MPs urged the Foreign Office to condition diplomatic relations with Iran to a halt to executions and torture and to refer the regime’s human rights dossier to the UN Security Council. They asked William Hague to “recognise the Iranian Resistance for regime change”.

The MPs also urged the UNHCR to recognise Camp Liberty as a UN Refugee Camp or else support the residents’ demand to immediately be returned to Camp Ashraf, and to respect Ashraf residents’ property rights and the right to sell their goods.

BBC: Thirteen people are feared missing after a South...