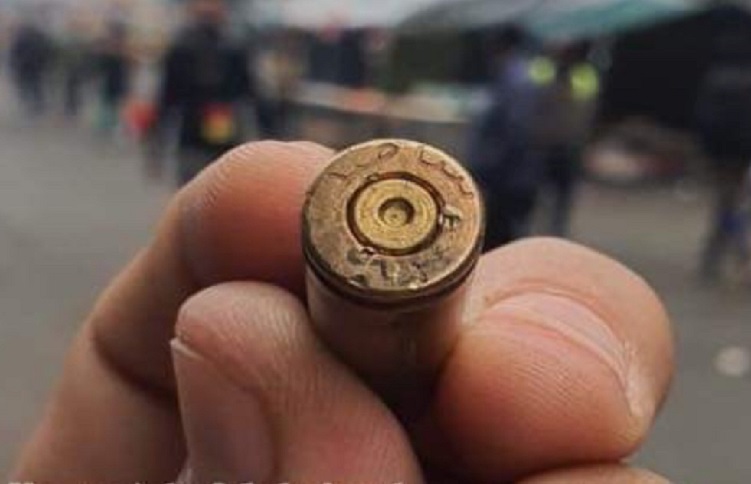 Iraq has been rocked by mass protests since early October, leaving 485 Iraqis dead and 17,000 injured, according to Iraq’s High Commission for Human Rights.

One of the new crimes of the Iranian regime in Iraq is targeting civil rights activists. Since the beginning of the uprising, at least three of them have been killed by Iranian–supported militia groups in the hope of scaring the protesters and discouraging them from continuing the protests.

On Sunday, another activist was shot dead by two gunmen, while two other activists survived attacks on their lives in Karbala and Amara in southern Iraq.

On December 2, nineteen-year-old Zahra Ali was kidnapped while distributing leaflets. She was tortured and her body was thrown outside her home in Baghdad a few hours later. Her body showed traces of electric shocks, blows, and fractures.

Last week, 53-year-old family father Fehim al-Tai was shot dead by two assailants on a motorcycle on his way home.

Ali Najm al-Lami disappeared on Tuesday while he was returning home from Tahrir Square, the epicenter of anti-government protests in the capital Baghdad. His body was found near his home on Wednesday with gunshot wounds in his head.

Who has the main role in the killings?

The Popular Mobilization Forces (PMF, or Hashd al-Shaabi) which is professing the ideology of the Iranian regime is seen as the main culprit. It is notorious as the ‘bloody hand’ of Iran’s regime in Iraq. The head of the PMF and Kata’ib Hezbollah, Abu Mahdi al-Muhandis, previously served in Iran’s Revolutionary Guards (IRGC). The Badr Organization, which was created as a formation of the IRGC during the Iran-Iraq War has a long history of allegiance to Tehran.

Despite former Prime Minister Adil Abdul Mahdi issuing a decree in July, which ordered the PMF to vacate their headquarters and formally integrate into the state’s security forces, they have continued to entrench their influence over the state and the rest of the country.

Iraq revolution as an answer to the regime in Iran

After the resignation of Adel Abdul Mahdi, a turning point occurred in the uprising of the Iraqi people, and the Iraqi revolutionaries were able to impose their will on Iran’s puppet rulers of Iraq for more than two months of persistence, presenting about 450 martyrs and thousands of wounded.

But the Iranian regime which is wrestling with the triumph of the Iraqi people and seeks to divert it by relating these popular movements to foreign intervention is seeking an opportunity to implement other plots, to bring this popular uprising to the end.

Qasem Soleimani, Major general in the Islamic Revolutionary Guard Corps (IRGC) and commander of its Quds Force, had been planning and coordinating with his Iraqi mercenaries for about a week to suppress and silence the Iraqi uprising, just like the November uprising.

Baghdad, #Iraq
Iraqis are seen showing their hatred to the images of Iranian regime Supreme Leader Ali Khamenei & IRGC Quds Force chief Qassem Soleimani as the source of all their country’s miseries.pic.twitter.com/Vx7VMYYv35

Finally, at midnight on Friday, 6 December 2019, the Hashd al-Shaabi, Badr, al-Khorasani, al-Aseeb, Hezbollah, al-Nojaba, with the support of government security forces, led by Qasem Soleimani and the IRGC, launched blitz attacks against the protesters in the Sanak parking and the Kalani Square.

A storm of bullets and tear gas were fired on the people, and the streets of these two areas were filled with dead bodies.

The Iranian mercenaries were able to temporarily occupy the two areas and push the people back. But as of midnight, on Friday, information and a call for help were swiftly launched, and the minarets of Baghdad began to broadcast the prayer and inform the public about the crime.

This timely announcement prompted many people and tribesmen to came to the place of the conflict, that night, repelling the invaders and recapturing the occupied areas.

International observers who followed the brutal attacks on defenseless people finally declared that the Iranian regime had failed in its plot and attack.

Protest organizers in Iraq called for a mass demonstration on Tuesday, 10 December, to commemorate the blood of martyrs in Iraq. In addition to the rallies held in most Iraqi provinces, especially Najaf and Karbala, to commemorate the martyrs, many people flocked to Baghdad.

The presence of millions of people and the solidarity of the Iraqi people and the armed support of the valiant Iraqi tribes forced the government to close all the Hashd al-Shaabi bases and expel them from Baghdad.

Protesters in southern Iraq blocked the al-Rumaila oil well, one of Iraq’s most important oil wells. Najaf tribes also threatened to take up arms if armed groups continued to attack demonstrators. Iraqi Army Chief of Staff Othman al-Ghanemi announced that security forces would be there to protect the demonstrators until their legitimate demands were met.

The October Revolution Demonstration Committee in Tahrir Square, in a statement, emphasized the need for more stability and standing in the way of the revolution, saying: “The heads of state and the corrupt sectarian government felt their final days. The revolutionaries have decided to oust them and bring them to justice for all the crimes committed against the Iraqi people while putting the sovereignty of Iraq in the hand of the Iranian regime.”

It concluded: “The blood of the martyrs commits us to continue their path, and we will not move back to our normal life until our country becomes what the martyrs want.”