AP: Religious motives appear to be behind the recent theft of 11 bronze statues of Iranian national heroes that have been stolen from the capital’s public parks, a local official said Wednesday. 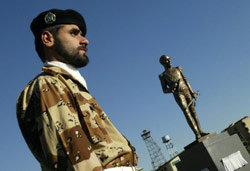 TEHRAN, Iran (AP) — Religious motives appear to be behind the recent theft of 11 bronze statues of Iranian national heroes that have been stolen from the capital’s public parks, a local official said Wednesday.

In a string of thefts that started in late March, unknown culprits have used heavy equipment to rip the statues from their pedestals and then carted them off. The thievery has prompted city officials to postpone erecting new statues in the capital.

Tehran city council official Morteza Talaei said the thieves appear to be from a “specific group” and are acting out of religious convictions. “It appears that currents and groups that see these statues as contrary to their religious and cultural beliefs are involved,” Talaei was quoted as saying by the official IRNA news agency.

The statues all depict prominent Iranians, which could contradict a strict interpretation of Islam that bans the depiction of human form in art.

Among the 11 statues that have disappeared, two of them were of Sattar Khan and Bagher Khan, national heroes of Iran’s 1906 constitutional revolution. Another depicted Ali Shariati, a contemporary thinker, while a fourth statue was of the famous Iranian poet Shahriar.

According to local newspaper reports, the stolen statues were worth between $12,000 and $50,000 apiece.

The semiofficial Mehr news agency says a Tehran traffic control camera recorded footage of the uprooting of one of the statues. Investigators are using the video to track the thieves down.

There are no reports yet available if any suspects have been arrested. Officials say the statues could have not been stolen without heavy tools.

AFP: Iranian President Mahmoud Ahmadinejad will have a hard...

US touts progress with Russia on Iran

AFP: Iran was the main topic in talks between...