By Thomas Erdbrink
Washington Post Foreign Service
Friday, May 14, 2010; A09 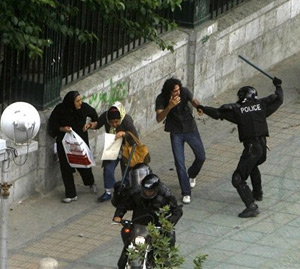 Sunday’s execution of five people, four of them members of the Kurdish minority, has sparked anger in and well beyond the Kurdish areas, analysts say. The five were accused in a series of bombings, but many here think that two of the convicted were innocent and were hanged in order to spread fear in advance of the June 12 election anniversary.

Analysts also saw a government warning in authorities’ decision this week to hand down heavy jail sentences to student leaders in Tehran who were accused of involvement in anti-government demonstrations.

“The government is trying to create a security atmosphere as a crucial month approaches,” said Ali Shakorirad, a known government critic. He is one of the leaders of the now-banned Islamic Participation Front, a party highly critical of Ahmadinejad’s policies.

Iran’s elections last year were followed by months of intense opposition protests and street riots — the most significant challenge to the central government in years. There is growing speculation that this summer could bring more demonstrations.

Already there are some signs of unrest. Protests broke out at two Tehran university campuses this week when Ahmadinejad and other government officials paid visits. On Thursday, witnesses reported strikes in Iranian Kurdish cities, where many shops were closed in protest of the executions, witnesses report.

“At this point, anything can be a spark for new protests,” said Abbas Abdi, a former journalist turned analyst and known critic of the government. “People are still angry and upset.”

Government supporters dismiss charges that authorities have launched any crackdown ahead of the anniversary. They say opposition leaders are simply using the executions and fresh jail sentences to reignite anti-government sentiment.

They note that Mir Hussein Mousavi and Mehdi Karoubi, who challenged Ahmadinejad during the elections and now lead a largely dormant grass-roots movement, have called for “events” marking June 12, and both have issued statements harshly condemning the executions.

To government supporters, such moves reek of political opportunism.

“Their movement has lost steam, and its leaders are disillusioned and hopeless,” said Amir Mohebbian, a political analyst close to Iran’s leaders. “Those executed were terrorists. They who sympathize with terrorists are terrorists themselves.”

In Tehran, the focal point of the earlier anti-government demonstrations, residents acknowledge that political tension is more subdued. That could change quickly, though.

“We have all tried to return to normal, but there are killings and arrests. Maybe some are smiling on the outside, but inside we are all still upset,” said Farzhad, a young office clerk who did not give his family name, sitting at a traditional teahouse on the slopes of the Alborz Mountains, north of the capital.

The executions have proven particularly controversial. Even though judicial authorities say the four executed Kurds were members of PEJAK, a separatist group designated by the United States as a terrorist organization, the executions have led to public sympathy for two of the convicted: a teacher and a young woman.

The teacher, Farzad Kamangar, was said by authorities to have been in possession of an explosive timer, and the woman, Shirin Alamhouli, was convicted of blowing up a car belonging to the Revolutionary Guards. But lawyers described the handling of their cases as a farce.

“Authorities have held on to their papers, preventing appeals. The initial court case lasted about five minutes. Their fate was predetermined,” lawyer Khalil Bahramian said in a recent interview.

Acknowledging doubts over the case, state television will air a special program featuring “documents regarding the terrorist actions of the hanged individuals,” the state-run Kayhan newspaper reported Thursday.

Shakorirad, the government critic, said the public’s doubts over the executions laid bare a widening rift between the government and the Iranian people.

“If the people distrust their rulers so much that they even feel sympathetic and understanding of those who are found guilty of terrorism,” he said, “that means the situation is becoming inflamed.”