Wall Street Journal: Three Americans, detained in Iran for the better part of a year after crossing into the country on foot from Iraq, met their mothers Thursday in a stage-managed appearance in Tehran, raising hopes the two men and one woman might soon be released. 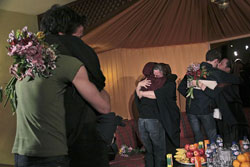 DUBAI—Three Americans, detained in Iran for the better part of a year after crossing into the country on foot from Iraq, met their mothers Thursday in a stage-managed appearance in Tehran, raising hopes the two men and one woman might soon be released.

The meeting took place at a hotel in northern Tehran. Iranian TV footage showed the three mothers, with heads covered, sitting together with their children on a couch, behind a table piled with food and drinks.

Many Western officials and analysts accuse Iran of long using foreign detainees as leverage in efforts to win the freedom of its own citizens around the world, and in its standoff with the U.S. and its allies over Iran’s nuclear ambitions. Iran has said the detentions are based on legal, not diplomatic, considerations.

The push for the release of the three could be threatened by renewed tension between Washington and Tehran. Earlier this week, the U.S. circulated a draft of proposed economic sanctions at the United Nations, after saying it had obtained Russian and Chinese support for the significantly watered-down measures. Iran has reacted angrily to the move.

The family of the three—Sarah Shourd, 31 years old; Shane Bauer, 27; and Josh Fattal, 27—have denied Iranian accusations they were spying, saying they were simply hiking in the relatively peaceful Kurdish enclave of northern Iraq, when they inadvertently crossed into Iran before being detained in July.

“It looks like maybe he lost a little bit of weight,” said Al Bauer, Shane’s father, in a telephone interview from Shakopee, Minn. “But he looks like my Shane.”

Last week, Iran granted the three mothers, Nora Shourd, Cindy Hickey and Laura Fattal, their hard-to-come-by travel visas, raising hopes that officials may be close to releasing their children. Swiss diplomats helped facilitate the trip since the U.S. doesn’t have a mission in Iran.

Thursday’s reunion came shortly after Iran agreed to release last weekend French academic, Clotilde Reiss, 24, after holding her for more than 10 months—either in jail or restricted to the French embassy in Tehran.

Ms. Reiss’ release was quickly followed by the release and deportation from France of a man convicted of killing a former Iranian prime minister in France. The victim was the last prime minister of Shah Mohammed Reza Pahlavi, who was overthrown in the Iranian revolution by the current regime. Paris and Tehran have denied the two releases were related.

And in April 2009, Iran charged Iranian-American journalist Roxana Saberi with espionage and sentenced her to eight years in prison. A month later, the judiciary freed her and allowed her to leave the country.

PoliticsHome: Qasem Soleimani is notorious for his role as...