Reuters: Boeing Co accused rival EADS of having courted Iran and other countries at odds with the United States and said this should figure in awarding a potential $50 billion U.S. Air Force refueling plane contract. 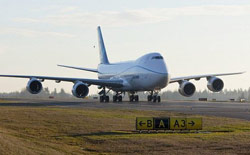 WASHINGTON, May 25 (Reuters) – Boeing Co accused rival EADS of having courted Iran and other countries at odds with the United States and said this should figure in awarding a potential $50 billion U.S. Air Force refueling plane contract.

EADS, headquartered in Paris and Munich, “continues to do business with countries that are not friendly to the United States,” Timothy Keating, Boeing’s vice president of government operations, told a small group of reporters.

He cited an EADS effort to market one of its helicopters at an Iranian air show. The event in question took place in 2005, Boeing officials later said, supplying the transcript and a link to video of an NBC television report at the time.

“We have not seen any indication that EADS no longer has an interest in marketing their military products to countries like Iran,” Daniel Beck, a Boeing spokesman, said in a followup telephone interview.

Keating and other Boeing executives urged U.S. officials to factor national security into the competition for a new fleet of tankers, used to refuel warplanes during flight.

A spokesman for EADS North American arm responded by accusing Boeing of mounting “a misinformation campaign” in an attempt to make the competition “about anything other than getting the best tanker for the Air Force.”

EADS’ James Darcy said Boeing was calling into question the U.S. Defense Department’s judgment since it was “DoD that stood up and said we could bid on KC-X as a prime” contractor.

“And that was based on their evaluation of a whole host of factors, principal among which were national security concerns,” Darcy said.

The Defense Department did not immediately respond to a request for a comment.

This removed the leverage that the U.S. government would have had to make sure of an uninterrupted flow of spare parts for any Airbus tanker in case of a policy difference with France and Germany, which hold stakes in EADS and which opposed the U.S.-led invasion of Iraq in 2003.

“What leverage does the United States have over EADS North America” the unit that would be the prime contractor, Keating asked.

“A lot less than they would have over the Boeing Company” which does a lot more business with Washington, he responded.

In the NBC television report that aired on Feb. 23, 2005, an EADS representative, identified as Michel Tripier, said his company was emphasizing its civil helicopters at the air show on the Iranian island of Kish.

“As a European company, we’re not supposed to take into account embargoes from the U.S.,” he said on camera at the time. (Reporting by Jim Wolf; Editing by Tim Dobbyn)