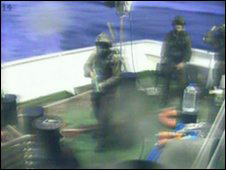 Up to 19 people died when Israeli forces stormed the aid-carrying ships at dawn in international waters off the northern Israeli port city of Haifa, Israeli television reported.

Rajavi, who heads the main opposition coalition National Council of Resistance of Iran (NCRI), extended her “solidarity and sympathy to President Mahmoud Abbas and the people of Palestine and strongly condemned the killing and wounding of innocent people”, according to an emailed NCRI statement.

“Today’s bloody attack only provides ammunition to the religious fascism ruling Iran and its proxies to escalate warmongering and terrorism, to strengthen fundamentalism throughout the region and world, and to exploit the ideals of the Palestinian people”, Rajavi said.

She said the Tehran regime was the “biggest cause of partition and schism” in Palestine in the past 30 years.  “By engaging in demagoguery and deception as well as spending hundreds of millions of dollars of the Iranian nation’s resources, it has delivered the greatest blows to the Palestinian cause”, she added.

Palestinian President Mahmoud Abbas described the killings as a massacre.

U.N. Secretary-General Ban Ki-moon on Monday said he was “shocked” by reports of the killings. “I heard the ships were in international water. That is very bad”, he said as he called for a “thorough investigation”.

The White House issued a cautious reaction, saying “The United States deeply regrets the loss of life and injuries sustained, and is currently working to understand the circumstances surrounding this tragedy”.

The European Union’s foreign affairs chief, Catherine Ashton, said the bloc was deeply concerned and she called on Israel to carry out an inquiry.

The United Nations human rights chief Navi Pillay said, “In the Gaza Strip the blockade keeps undermining human rights on a daily basis … the current situation falls far short of what is necessary for the population to lead normal and dignified lives”.

Based in part on wire reports.

AFP: Iran is losing influence in Iraq, US President...