Newsweek: The Supreme Leader was embarrassed when hardliners heckled the grandson of Ayatollah Khomeini, Iran’s founder.

The Supreme Leader was embarrassed when hardliners heckled the grandson of Ayatollah Khomeini, Iran’s founder. 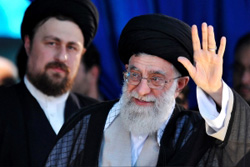 For the first time in months, Supreme Leader Ayatollah Ali Khamenei ran Friday prayers in Tehran last week. He took the pulpit to commemorate one of the biggest occasions in the Iranian calendar: the 21st anniversary of the death of Ayatollah Ruhollah Khomeini. But rather than a somber ceremony, the service became a showcase for the deep divisions that continue to roil Iran.

The problems started before Khamenei even appeared. Shortly after noon, Hassan Khomeini, the grandson of the grand ayatollah, took the stage. As he started to speak, the crowd, shockingly, began booing and chanting, “Death to those who oppose velayate faqih,” a reference to the Supreme Leader. It was terrifically awkward. Here was the young Khomeini, a descendant of Iran’s founder in charge of an organization that oversees his grandfather’s legacy, being heckled by a crowd of thousands. The state-controlled TV network, which was broadcasting the ceremony live, panicked: they first turned the audio down low to drown out the chants, and then they cut to shots of people milling about outside the mosque without audio. After several attempts at calming the crowd, Khomeini walked off the stage. Many in the crowd cheered.

Why would a crowd at Khomeini’s memorial boo his grandson off the stage? In the past year, the supporters of President Mahmoud Ahmadinejad and many other hardliners in the Iranian government have frequently cited the defense of Khomeini’s legacy as a justification for cracking down on opposition protestors. In so doing, they ignore the fact that almost all of Khomeini’s descendants, including Hassan, support the Green Movement. This struggle between the hardliners and Khomeini’s family is one of Iran’s ironies that is rarely discussed openly.

Hassan, who never returned the podium, has met with opposition leader Mir Hossein Mousavi and has spoken out against the government crackdown on protestors (though he has never questioned Khamenei’s right to rule). Other Khomeini heirs include Zahra Eshraghi, a granddaughter. Eshraghi is a human-rights activist who has also expressed her support for the Greens (she was even detained briefly by security forces when she tried to participate in an opposition protest last February). Then there’s Khomeini’s daughter, Zahra Mostafavi, who endorsed Mousavi in last year’s election and heads up a women’s party that includes Mousavi’s wife, Zahra Rahnavard. The Khomeini family’s support for the reformist cause isn’t new: Ali Eshraghi, another of Khomeini’s grandsons, was barred for undisclosed reasons (read: his moderation) from running in the 2008 parliamentary elections. But rarely have one of the Khomeinis received such a public dressing down as Hassan did last week—at the gravesite of his grandfather, no less.

For his part, Supreme Leader Khamenei did little damage control, even though he has worked hard to present a united front for Iran’s leadership, knowing that discord suggests vulnerability. He took the stage after Khomeini and asked the crowd to act in a more appropriate manner. But that was it. No defense of Khomeini and no rebuke to the crowd. With the anniversary of the contested election just days away now, Khamenei has been trying to manage a delicate balancing act between quieting and frightening the opposition—and sending mixed messages in the process. On Wednesday, he announced that 81 jailed opposition protestors were being pardoned, a clear olive branch to the Green supporters. But in the Friday prayers today, he warned again that anyone who opposes the government and tries to create unrest will be confronted harshly. Surely he had Khomeini, whose office was ransacked by hardline Basij members last December, in mind.

Iran to expand enrichment in defiance of sanctions