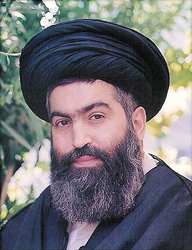 Iran’s constitution endorses the system of “Velayat-e Faqih”, or the supreme rule of a religious legal scholar. Supreme Leader Ayatollah Ali Khamenei can overrule all decisions made by the government or Parliament.

The Outrage and Opposition to Political Islam

The New statement of Mr. Boroujerdi from Evin prison

{« و لقد کرّمنا بنی آدم » [We really made humans respectful]} respected and has never wanted humans to suffer disgrace and poverty.  With all my heart, I have dedicated my whole existence to the Lord.  His charters and commands have enhanced human dignity and His banner and flag has been {« لقد خلقنا الانسان فی احسن تقویم » [We really create human in the best condition]}.  God has never commanded the torment and persecution of human beings that are the best creature in the universe. God has always respected and appreciated His best creation, [the human being], and has never subjected His creation to any form of legal difficulty and torment. Many years of my life have been spent on religious preaching and propagating the culture of real and peaceful religion. And I always devoted my life to communicating God’s kindness and gifts to people and to attracting […] people without any expectations. Divine success in my mission was so great that masses of my compatriots are brought together in the spiritual assemblies although the regime denies us access to the mass media.  The success of my movement created fear in the hearts of the insular religious authorities.  The authorities refuse to tolerate a community of believers that escaped from their religion of violence.  The regime used force to destroy views and rituals which demonstrate that Islam is incompatible with politics. As a result, infants were subjected to total cruelty, young people were tortured, the elderly were treated without mercy, and some people were murdered.

Today, I ask you, the leaders of political religion, how you can justify intervening in the internal affairs of other countries in various ways.  Meanwhile, you cannot permit any independent voices to be heard within your own country and suppress them rapidly with overwhelming force. Iranians inside their homeland are not allowed to hear and follow thoughts and ideas that are independent of government and state.  Iranians have no independence and freedom of choice in their private thoughts and even votes. All aspects of their lives are surrounded by red lines of greedy and hegemonic state powers.  If anyone dares to protest and criticize this pitiful state of affairs, he will be destroyed with numerous forms of pressures, culminating in punishment in Evin prison! If they ask for support from liberals and human rights activists from the outside world, they are accused of spying. On the other hand, any echo of compassionate support from the international community for Iranians’ struggle for basic human rights is condemned as the work of imperialism and Zionism! However, pouring the people’s property into the pockets of local and foreign missionaries and agents is considered legitimate and reasonable!  To establish propaganda and military bases around the world, at high prices which undermine real and legal owners of treasury, is contrary to the divine traditions.  These conditions which are the result of radical Islam, cause social pessimism toward our noble and divine religion and represent a great and unforgivable injustice to humanity and merciful God.

I, who am at the risk of blindness and paralysis, declare my disgust and hatred of any religion and faith that would create a hard life for people, causing the collapse of the nation and frustration and oppression of my compatriots.

AP: Western-led sanctions and diplomatic pressure will not force...