AP: A wealthy Manhattan investment banker and former top Democratic fundraiser was sentenced Thursday to 12 years in prison for defrauding banks of $292 million, some of which he donated to politicians including Barack Obama, Hillary Rodham Clinton and Al Gore. 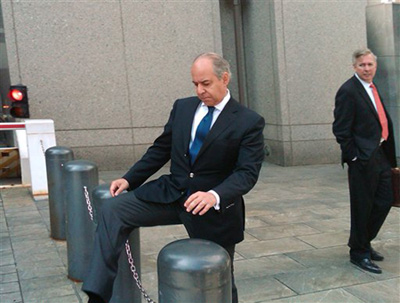 NEW YORK (AP) — A wealthy Manhattan investment banker and former top Democratic fundraiser was sentenced Thursday to 12 years in prison for defrauding banks of $292 million, some of which he donated to politicians including Barack Obama, Hillary Rodham Clinton and Al Gore.

Hassan Nemazee, 60, had reached a plea deal in March, admitting that he cheated banks out of the money and pleading guilty to three counts of bank fraud and one count of wire fraud. U.S. District Judge Sidney Stein in Manhattan said he’ll get out of prison in about a decade.

Prosecutors said he used some of the proceeds from his crimes to make personal donations to election campaigns, to make charitable donations and to live a lavish lifestyle that included apartments in Italy and Manhattan, partial interest in a private plane and a luxury yacht.

Stein said he showed leniency to Nemazee in part because of “his involvement in American political life.” If the judge had followed federal sentencing guidelines, Nemazee would have received at least another three years in prison and as many as 19 1/2 years.

Prosecutors said Nemazee used fake collateral starting in 1998 and continuing for more than a decade in order to obtain large loans from major banks. The judge ordered him to pay $292 million in restitution.

An indictment said he forged signatures, concocted bogus account statements and established “virtual offices” to conceal a scam. It said he used proceeds from new loans to pay off older ones — a maneuver prosecutors called a Ponzi scheme.

In 1999, President Bill Clinton nominated Nemazee to be U.S. ambassador to Argentina, but the Senate never confirmed the appointment, in part because of concerns about Nemazee’s business dealings.

Nemazee told the judge he blamed his crimes on “pride, ego, arrogance, self-image, self-importance. All these and more are reasons why I traveled down this destructive path.”

Prosecutors said he unsuccessfully tried to capitalize on his standing and reputation in political circles by seeking nomination to a Cabinet-level position last year.

In a letter submitted to the judge this week, the government said Nemazee had made more than $845,000 in donations to political candidates and political parties and more than $1.1 million of charitable donations from late 1997 through August 2009.

The government said it sent letters after Nemazee’s guilty plea to 115 recipients of charitable and political donations requesting that the recipients return the proceeds to the government.

It said that another $285,000 was being disputed by recipients as subject to forfeit, and that the rest involved money recipients had donated to charities after Nemazee’s arrest.

Money already forfeited includes $167,463 from the Council on Foreign Relations, $100,543 from Harvard University and $50,000 from the Presidential Inaugural Committee, the government said.

The letter said Friends of Hillary had pledged to return $8,200 and Hillary Clinton for President promised to return $11,500, in addition to $11,500 it returned to Nemazee in August 2008. It said the William J. Clinton Foundation had agreed to forfeit $53,000, though the government has agreed that another $100,000 in donations does not need to be forfeited.

The letter said Obama for America had agreed to return the full $13,800 it had received, even though it had already donated $4,600 of funds received from Nemazee to charities after his arrest. It said John Kerry for Senate pledged to return $4,600, and John Kerry for President said it would return $5,000, in addition to $2,000 being returned by the Kerry Committee.

Also included in funds the government agrees no longer needs to be forfeited was $50,000 Nemazee donated to the Gore-Lieberman Recount Committee in 2000, $9,200 by Biden For President Inc. and $2,000 by Edwards for President.

Nemazee, an Iranian-American, was ordered to begin his sentence by the afternoon of Aug. 27. As the sentencing hearing ended, Nemazee wiped his eyes and hugged family members. When he left the courthouse, he walked quickly to a waiting sedan.

More than 100 letters were written to the judge on Nemazee’s behalf, and Stein cited one that he said resonated with him because it told how important it was in Iran to protect the honor of a family name.

“The proud name Nemazee now also involves you being a federal felon subject to a prison term. And that’s really a tragedy,” Stein said. “At some level, this is a Shakespearean tragedy. Only you brought this about.”

The judge called Nemazee a “highly intelligent, educated person” who had been extremely charitable. He also made several mentions of his involvement in political life, saying it was admirable and lifted him high in Iranian-American society.

Yet, he said, Nemazee had committed a crime that was “breathtaking in its brazenness, in its scope.”

Nemazee said he has spent long hours trying to understand his actions.

“The guilt and shame that I bear,” he said, “will remain with me long after I return from prison.”

Rocard went to Iran on own initiative, socialist lawmaker says