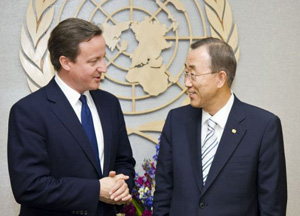 Cameron came to New York for a private meeting with the UN secretary-general and talks with New York Mayor Michael Bloomberg, a day after he conferred with US President Barack Obama at the White House.

The British prime minister and Ban “agreed that the current strategy in Afghanistan was right, and that a political surge was an essential part of the next phase of the campaign,” Cameron’s office said in a statement.

On Tuesday, Ban and US Secretary of State Hillary Clinton led representatives from 70 organizations and countries at a Kabul conference, pressing Afghan President Hamid Karzai to step up efforts to end graft and ensure aid money was best spent.

Karzai sought to convince the conference that his government could assume security responsibility by 2014 and demanded greater control of aid money.

On global poverty, Ban and Cameron agreed that a UN summit on the poverty-reduction Millennium Development Goals (MDGs) in September “was a vital opportunity to get the world back on track to meet its commitments to the most vulnerable on the planet.”

The two leaders also touched on the Middle East, urging Israel and the Palestinians to engage in direct peace talks.

“There was a clear consensus on the need for a concerted international effort to deliver a diplomatic solution on the Iran nuclear issue and on the need to implement” the fourth round of sanctions the Security Council slapped on the Islamic Republic in June, the British statement said.