AFP: A Japanese shipping company maintained Thursday that its oil tanker was likely attacked in the Strait of Hormuz a day earlier, dismissing reports it may have been hit by a freak wave. 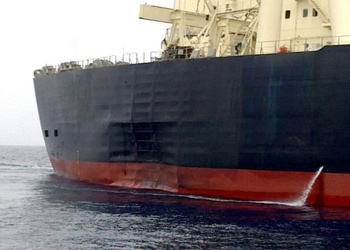 TOKYO (AFP) — A Japanese shipping company maintained Thursday that its oil tanker was likely attacked in the Strait of Hormuz a day earlier, dismissing reports it may have been hit by a freak wave.

Mitsui OSK Lines officials reiterated at a Tokyo press conference that crew members saw a flash and heard an explosion in the incident shortly after midnight local time on Wednesday in the waterway between Iran and Oman.

“There are some reports saying the tanker was hit by strong waves, but it’s quite unlikely,” said Mitsui safety management official Masahiko Hibino.

“We have not reached a conclusion, but we still suspect” the tanker was hit by a blast, Hibino said of the mysterious incident some 18 kilometres (11 miles) off the coast of Oman, in which one crewman was slightly injured.

He said the company had not changed its stance since Wednesday when it said it suspected it had been attacked, perhaps by terrorists.

US and British naval officials were Thursday inspecting the ship, he said.

The Japan-bound vessel — crewed by 16 Filipinos and 15 Indians — was carrying 270,000 tonnes of crude oil but did not suffer a spill.

One of the crew saw a flash on the horizon at the time, while several other sailors heard an explosion, Hibino said, adding that the weather was fine and there were no reports of high waves in the region.

Hibino displayed images of the tanker, the M. Star, which showed damage to the railings, the loss of a life vessel, a shattered window, and broken furniture and fittings and shattered glass inside a dry cabin.

Pictures of the outside of the vessel — published earlier by the state-run UAE news agency WAM — showed an indentation several metres across in the hull, but no obvious burn marks or signs of an explosion.

The ship arrived late Wednesday under its own steam in Fujairah’s waters in the United Arab Emirates for repairs.

Fujairah port director Captain Mussa Murad on Thursday did not rule out the possibility of an attack, but said that the investigation was continuing.

“In a maritime accident, everything is possible,” he told AFP by telephone when asked about the possibility of a submarine attack or hitting a mine.

“The cause remains unknown and the investigation is still going on,” he said.

The Strait of Hormuz, less than 100 kilometres (60 miles) wide at its widest point, separates Oman from Iran and is the gateway into the oil-rich Gulf.

Japan, the world’s second biggest economy, sources some 90 percent of its oil from the Middle East, much of it from the Gulf.

In Dubai, the WAM news agency had earlier quoted an official as saying the tanker bore no external signs of an attack. A UAE port official said the tanker was hit by a “high wave caused by a tremor”, said the agency.

But on Thursday, WAM said that the causes of the incident were “unknown.”

The US Geological Survey, which records earthquakes worldwide, lists no major seismic events in the region for the time of the incident.

The US Navy Fifth Fleet, based in Bahrain, has said the shipping route, through which an estimated 40 percent of oil exports pass, remained open.

AFP: Iran said on Sunday it has reached an...

The Guardian: In an exclusive interview with the Guardian,...