Mistaken as an Iranian martyr, then hounded

New York Times: Zahra Soltani, whom everyone calls Neda, will never forget the day she saw her death announced on television, accompanied by the picture she had posted on her Facebook page. 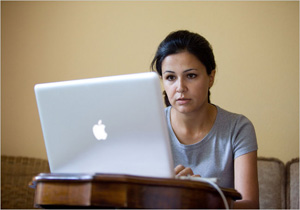 FRANKFURT — Zahra Soltani, whom everyone calls Neda, will never forget the day she saw her death announced on television, accompanied by the picture she had posted on her Facebook page. “They said that I was killed during the protests against the presidential elections,” she said, shaking her head.

In fact, it was another Iranian woman with a similar appearance and name, Neda Agha-Soltan, who was shot and killed during a demonstration in Tehran in June 2009. Her death was captured on video and posted on the Internet, becoming a symbol of the fight against the repressive government of President Mahmoud Ahmadinejad.

Soon, Ms. Soltani said, she found herself swept up in the government’s efforts to counter any suggestion that its security forces had been involved in the shooting — and to deny that the woman in the video had died. Iranian intelligence officials, Ms. Soltani said, pressured her to come forward publicly to show that she was alive and denounce the shooting as faked, and threatened her when she did not comply.

Before the demonstration, Ms. Soltani, a 33-year-old English-literature teacher at a campus of Islamic Azad University who had not been active in politics, had been preparing for a presentation at a conference in Greece. Just days after the protest march, she fled Iran, ending up as a refugee in Germany, where she was granted political asylum in March after the authorities investigated her story.

“I never planned to leave my country and my family, but I was forced to,” Ms. Soltani said. She consented to an interview, her first with an English-language media organization, on the condition that some details about her new life be concealed because she fears the Iranian security services.

The upheaval in Ms. Soltani’s life began on June 20, 2009, when a video appeared on YouTube showing a young dark-haired woman who was shot during the demonstration. As she lay dying, with blood running from her mouth, an older man (some reports said it was her father, other said it was her music teacher) shouted the name “Neda.”

Journalists worldwide tried to find out who the dying woman was; the video image of her was not entirely clear, and she was wearing a veil. At some point she was identified as Neda Agha-Soltan or Neda Soltan, a 26-year-old student at the Tehran campus of Islamic Azad University, the school with which Ms. Soltani was affiliated.

Someone came across Ms. Soltani’s profile on Facebook under the name Neda Soltani and copied her photo, which soon appeared all over the world in newspapers and television broadcasts and on Web sites.

“I was very surprised, when I opened my e-mail account on June 21 and found over 60 people from all over the world who had added me on Facebook” as a friend, Ms. Soltani said. That number kept growing, puzzling Ms. Soltani and her mother, until they saw her picture on television, cast as a victim of Iranian security forces.

She said she and her friends started to contact media outlets to tell them that she was not the woman in the YouTube video. Even when the family of the slain woman released photos of her on June 23, Ms. Soltani’s pictures were still used in news reports and on Web sites.

By June 24, the Iranian intelligence service started looking for her, Ms. Soltani said. Panicked, she contacted Amnesty International in London. “She was very afraid and scared and did not know what to do,” said Ann Harrison, a researcher on Iran for Amnesty International. “She came across as a person who was not involved in politics, who used to have a quiet life.”

The group, which considers Ms. Soltani’s account credible, later published a report about the repression of dissent in Iran; in a section on the case of Neda Agha-Soltan, it mentioned the fact that the photo had been used in error. A report on the mix-up also appeared on a BBC blog.

Agents from the intelligence service picked her up from her home outside Tehran and took her for questioning, Ms. Soltani said.

“They asked me to say on camera that I was still alive and that the Greek Embassy in Tehran had leaked my picture to the media and that the story was wrong,” Ms. Soltani said. (Her Facebook picture was identical to the one that she had given to the embassy weeks before in seeking a visa to the academic conference.)

“They wanted to use me to denounce Neda’s death,” she said. “They wanted to draw attention to me to show the world, look this is a lie.” They also wanted her to blame conspirators from the West for the episode.

Ms. Soltani said that some of the men, who were armed, threatened her. “They said it would be better for my safety if I did what they wanted me to do,” she said.

They picked her up and continued to press her in another session several days later, Ms. Soltani said. Ms. Harrison of Amnesty International said Ms. Soltani’s description of her interrogation was consistent with others they had received. “There is a long practice of the Iranian authorities coercing people to make videotaped ‘confessions’ or statements — which are sometimes shown on national TV or sometimes are held in reserve as a means of maintaining pressure on an individual,” she said.

Finally, on July 1, the intelligence service confronted Ms. Soltani about the phone calls that she had made to Western countries — to media outlets, friends she had enlisted for help, and Amnesty International — and accused her of spying, she said.

“All I had was my rucksack, my laptop and a small handbag,” she said. She stayed in Turkey for nine days, then traveled to Greece and on to Germany, where she arrived in mid-July 2009.

A spokesman for the Iranian Embassy in Germany disputed Ms. Soltani’s story, but declined to comment further.

Enrico Manthey, a spokesman for the federal office for migration and refugees, said the German government was persuaded by Ms. Soltani’s account.

“If we wouldn’t have believed that what she has told us was true and accurate, we would not have granted her political asylum,” Mr. Manthey said. “We do have our own sources to check if a story might be true or not.”

Ms. Soltani, who is living in a town outside Frankfurt, is unemployed and looking for work. She said she missed her family and her life as a teacher.

“I am very homesick,” she said. “I used to have a good life until the nightmare started.”

And she is still haunted by the mistake about her identity — her photo routinely appears in news reports and on Web sites with reports about the death of Neda Agha-Soltan.

“Both sides have destroyed my life, the Western media and the Iranian intelligence,” said Ms. Soltani, staring out the window of her apartment. “But I still have the hope that at least the media will realize what they have done.”

AFP: Iran said on Sunday that a fatwa ordering...