Lembit Opik gets a job on Ahmadinejad’s favourite television station

Daily Telegraph: Unseated at the general election as a Lib Dem MP, Lembit Opik has landed a new job working for Press TV, the controversial satellite channel owned by the Islamic Republic of Iran. 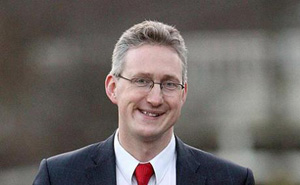 Unseated at the general election as a Lib Dem MP, Lembit Opik has landed a new job working for Press TV, the controversial satellite channel owned by the Islamic Republic of Iran. The 45-year-old former member for Montgomeryshire is presenting a show called A Simple Question.

Attending the opening of Tanguera at Sadler’s Wells, Opik was tetchy when I inquired about his new employers. “I am a journalist now – I have the same job as you, you know, and probably on a smaller salary,” he said.

“It is necessary for me to work. I don’t see that Press TV is ‘controversial’: that is to pass judgment and it is not for one media organisation to pass judgment on another.” Opik has long been an enthusiastic, if so far only occasional, broadcaster, making appearances on Have I Got News For You? and reviewing the newspapers late at night for Sky News. Although Press TV has some serious journalists working for it, its impartiality and accuracy has been questioned. Last year the broadcaster Nick Ferrari resigned from it after it sought to justify the execution of demonstrators on the streets of Tehran following the country’s disputed election.

This week’s A Simple Question investigates how objective the news media is in the UK. “We want to explore whether it does a good job at keeping impartial or whether there are consistent cases of bias in the reporting that we see,” Ed Augustin, one of Opik’s assistants on his discussion programme, disclosed.

The channel was launched in 2007 with a pledge from the Iranian president Mahmoud Ahmadinejad that it would be “free from all vices that have polluted the world”. Opik is, meanwhile, pursuing a career as a stand-up comedian.