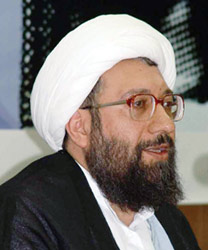 Ahmadinejad used a meeting on Sunday with prayer leaders to denounce as “strange” a court’s decision to hand Mohammad Jafar Behdad who is also the deputy chief of the presidency office, a suspended seven-month jail sentence.

“Such remarks from the president of the country in an official meeting is not justifiable… it is not right,” Iran’s Shargh newspaper quoted the justice chief as saying.

Ahmadinejad must “use a language that is composed, dignified… correct and fair,” Larijani said, in comments widely reported in other local media.

Behdad received the suspended jail term from a judge for writing an article against Ali Larijani, the judiciary chief’s brother who is parliament speaker.

The parliament speaker, who often criticises Ahmadinejad, especially over his handling of Iran’s economy, has previously denied congratulating Mousavi.

The article accused the speaker of “strengthening the will (of Mousavi) to provoke riots and insurgency” by making the congratulatory telephone call to the opposition leader.

Ahmadinejad criticised the verdict which he said was given despite the jury finding Behdad not guilty.

“A strange incident happened recently. Although the jury with an absolute vote said the writer of this article was not guilty, the judge, going against the jury, suspended him for seven months,” Ahmadinejad said.

“The main issue is should we allow anyone to talk any way he wants to? Why do we have laws then? The laws are written so that the people abide by them. So that nobody can insult or accuse others,” Larijani said.

Ahmadinejad had also criticised the judiciary for not prosecuting those who insult him.

Larijani took objection to that too, saying: “I have pointed out to him in the past… that this is not the reality.”

The June 2009 poll result triggered massive street protests in Tehran against Ahmadinejad, with supporters of Mousavi accusing the authorities of committing fraud to keep the hardliner in power.

Leave it to Israel?

Washington Times: It is remarkable how quickly discussions about...

Reuters: Russia's Foreign Minister called for a meeting between...