Los Angeles Times: Efforts by the United States and its European allies to build a united front to halt Iran’s nuclear program are facing increasingly bold resistance from China, Russia, India and Turkey, which are rushing to boost their economies by seizing investment opportunities in defiance of sanctions imposed by the West.

China, Russia, India and Turkey move into the lucrative void left by U.S. and EU sanctions that aim to halt Iran’s nuclear program. 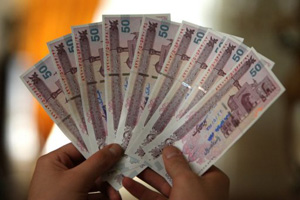 Reporting from Washington – Efforts by the United States and its European allies to build a united front to halt Iran’s nuclear program are facing increasingly bold resistance from China, Russia, India and Turkey, which are rushing to boost their economies by seizing investment opportunities in defiance of sanctions imposed by the West.

The Obama administration and the European Union opted to try to toughen United Nations sanctions against Iran with their own unilateral restrictions on foreign companies that do business with Tehran’s energy sector, hoping that squeezing the country’s most lucrative industry can force the Islamist government to bend on its nuclear program.

But the four countries condemned the additional sanctions, and in recent weeks went further: Since the new U.S. sanctions took effect July 1, all four have moved ahead with trade and investment deals that violate the sanctions or threaten to do so in the future.

The countries say they will honor the weaker set of sanctions imposed on Iran in June by the U.N. Security Council, but are under no obligation to follow the more stringent rules that the United States and European Union tacked on in July.

The U.S. sanctions prohibit petroleum-related sales to Iran, yet China and Turkey have sold huge cargoes of gasoline to Tehran, and Russian officials say they will begin shipping gasoline as well later this month, according to industry officials. The four countries also have signed deals or opened talks on investments worth billions of dollars in Iran’s oil and gas fields, petrochemical plants and pipelines.

The countries “are making it very clear they are not going to go along with the new American and European efforts to ratchet up pressure on Iran,” said Ben Rhode, an analyst with the International Institute for Strategic Studies in London.

Although China’s economic ties with Iran have been growing for 15 years, the recent expansion of its business “has been amazing,” said a senior European official, who asked to remain unidentified because of the diplomatic sensitivity of the issue.

“Sanctions will not hinder us in our joint cooperation,” Sergei Shmatko, Russia’s energy minister, declared last month in Moscow after signing an agreement for a long-term energy partnership with his Iranian counterpart.

Obama administration officials boast that the new sanctions already have begun to damage Iran’s economy. European energy companies that have been key partners have canceled deals with Iran, and gasoline imports — badly needed because of Iran’s limited refining capacity — have slumped.

Yet the U.S. dilemma is clear: If Iran can meet its needs with these eager partners, the sanctions lose much of their bite.

And if European companies see that the new rules simply shift Iran’s lucrative business to competitors, they will pressure their governments to jettison the sanctions in hopes they can get back into the Iranian market.

U.S. and European officials acknowledge the danger of other countries snapping up this business, and are pressuring the governments not to allow their companies to do so.

Einhorn told a House panel late last month that China is of special concern because “it has backfilled when a number of responsible countries have distanced themselves from Iran. We need to speak to the Chinese.…”

The United States and its allies are pressing Iran to give up its nuclear development program because they believe Tehran wants its own nuclear weapons. Iran insists its nuclear program is for civilian energy purposes.

The four countries say they don’t want Iran to develop a nuclear weapon, but don’t see why they shouldn’t make money off Iran’s vast resources. China and India are also eager to lock up energy supplies for their fast-growing economies.

The U.S. sanctions seek to punish companies that sell refined petroleum products to Iran, or help Iran refine them. The U.S. government can fine foreign companies, but the biggest weapon is its ability to cut off companies’ access to the U.S. market — a powerful threat to most international concerns.

Russia and China say they were surprised and disappointed that the Americans and Europeans, after pressing them to support U.N. sanctions on Iran for months, then adopted tougher sets of unilateral sanctions.

In recent days, senior officials of both countries have rejected calls from Washington to back off their business with Iran.

Obama signed the sanctions bill July 1, but the move did not derail a number of deals between Asian nations and Iran.

Days later, Chinese energy firms China International United Petroleum & Chemicals Co., also known as Unipec, and PetroChina International Co., or Chinaoil, sold four tanker cargoes of gasoline to Iran, while four others were sold by the Turkish refiner Tupras, said an oil industry official who asked to remain unidentified because he was speaking about an unannounced deal.

Also in July, India opened new talks with Iran over a $7.4-billion pipeline that would deliver natural gas to India and Pakistan. A Turkish company, Som Petrol, signed a $1.3-billion deal to build a 410-mile section of pipeline carrying natural gas from Iran to Europe.

Russian and Iranian energy officials, after a meeting in Moscow, issued a statement saying they were “developing and widening” their joint efforts in the oil, gas and petrochemical sector.

The Russian Foreign Ministry has warned the United States against trying to punish Russian firms for expanding business in Iran.

Energy industry experts say China and other countries may continue signing deals with Iran, but before sinking money into the projects they will probably wait to see how strongly the United States and Europe will enforce the sanctions.

But it remains unclear how tough the Obama administration will be in punishing foreign companies, since doing so risks enraging major powers and complicating relations.

In 1998, for example, the Clinton administration considered sanctions against France’s Total, Russia’s Gazprom and Malaysia’s Petronas under an earlier law punishing foreign companies that invested in Iran. But to the dismay of some in Congress, President Clinton waived the punishments after loud protests from the three governments.

This month, the Obama administration may reveal whether it is willing to give the new sanctions teeth. The administration is considering sanctions against 10 foreign companies and may announce its decision in the next few days. It has not disclosed where the companies are based.

Mark Dubowitz, a supporter of sanctions at the Foundation for Defense of Democracies, said large fines or other strong action “would send a ripple of fear through the entire energy industry.”

If the response is mild “it would send a message of business as usual, and all the companies that have left would come back in,” he said.

But Edward Chow, a former energy industry executive at the Center for Strategic and International Studies, noted that the countries the White House might enrage if it hands out stiff punishments are also ones whose cooperation the United States needs in its efforts to persuade Iran to give up its nuclear ambitions.

“This has kind of painted the president into a corner,” he said.

Taliban fighters being taught at secret camps in Iran

Sunday Times: The Taliban fighters scurried up the craggy...