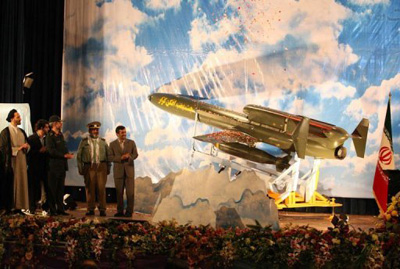 Television footage showed the president applauding as a blue cloth which had been covering the drone was pulled back to reveal a short aircraft painted in military-green with the words “Bomber jet” written on its side.

Images were then broadcast on television showing the aircraft flying, while Fars news agency quoted Defence Minister Ahmad Vahidi as saying the drone had a flight range of up to 1,000 kilometres (621 miles).

“This jet, before it heralds death for enemies, is the messenger of salvation and dignity for humanity,” Ahmadinejad said in his speech marking the unveiling of the drone in a hall at Tehran’s Malek Ashtar university.

The launch of the aircraft comes as Iran marks on Sunday its annual Defence Industry Day.

State television’s website reported that the drone has “different capabilities, including carrying bombs to destroy targets.” It said the plane can fly for a “long range at high speed.”

The website cited Vahidi as saying that the Karar is a “symbol of the versatility and advancement of Iran’s defence industries.”

Over the next few days Iran is expected to make series of further military announcements as the nation marks the annual government week, a period used by Tehran to tout its achievements.

In this period Iran is also expected to test fire a third generation Fateh 110 (Conqueror) missile. Iran has previously paraded a version of Fateh 110 which has a travel range of 150 to 200 kilometres (90 to 125 miles).

Also during government week, the production lines of two missile-carrying speedboats, Seraj (Lamp) and Zolfaqar (named after Imam Ali’s sword) are due to be inaugurated.

The unveiling of Karar comes days after Iran took delivery of four new mini-submarines of the home-produced Ghadir class. Weighing 120 tonnes, the “stealth” submarines are aimed at operations in shallow waters, notably in the Gulf.

Iranian officials regularly boast about Tehran’s military capabilities and the latest declarations coincide with warnings by local officials against any attack on the Islamic republic.

Iran’s arch-foes the United States and Israel have not ruled out a military strike against Tehran to stop its controversial uranium enrichment programme.

The plant, which is not targeted by UN sanctions, eventually aims to generate 1,000 megawatts of electricity.

AFP: OPEC announced Thursday it was keeping its oil...