AFP: Turkey is to remove Iran from a watchlist of nations it considers a specific threat to its national security, a news report said Monday, amid Western concerns of rapprochement between the two countries. 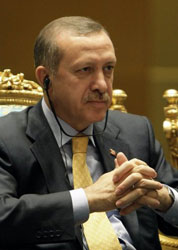 ANKARA (AFP) — Turkey is to remove Iran from a watchlist of nations it considers a specific threat to its national security, a news report said Monday, amid Western concerns of rapprochement between the two countries.

The updated list is contained in Turkey’s security review produced by the country’s National Security Council which will be adopted in October and will no longer refer to Iran as a “specific threat”, the Milliyet newspaper said.

The review replaces a previous edition published five years ago, the newspaper added.

Members of the council, made up of government and military leaders, were not immediately available for comment on the report on Iran, which Western nations accuse of seeking to develop nuclear weapons.

The updated review mentions Iran’s controversial nuclear weapons programme and repeats Turkey’s diplomatic line that it favours a nuclear-free Middle East, in a statement taken as a reference to Israel which is believed to hold the region’s only nuclear weapons arsenal.

Turkey’s improved ties with Iran have caused concern in the West. Turkey, a non-permanent member of the United Nations Security Council, upset the United States and its Western allies when it opposed a resolution to impose new sanctions on Iran that was adopted by the Security Council in June.

The Islamist-rooted government of Prime Minister Recep Tayyip Erdogan insists that it retains its strong ties to the West even as it seeks deeper relations with its Middle East neighbours and Asia.

At the same time Turkey’s relations with Israel have been strained, notably by the May 31 Israeli raid on a Gaza-bound Turkish aid ship.

Turkey threatened to sever ties completely following the deadly raid unless Israel apologised, a step the Israelis refused to take.