Reuters: Iranian President Mahmoud Ahmadinejad has defied calls to fire one of his closest aides and appointed him envoy to the Middle East instead, suggesting that for now he may have the upper hand over his critics. 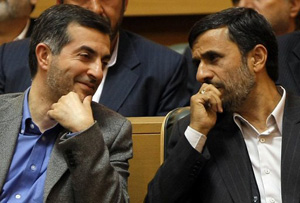 TEHRAN (Reuters) – Iranian President Mahmoud Ahmadinejad has defied calls to fire one of his closest aides and appointed him envoy to the Middle East instead, suggesting that for now he may have the upper hand over his critics.

Media reported on Monday that Esfandiar Rahim-Mashaie, the target of frequent criticism from inside the hardline establishment since he became chief of staff last year, was taking one of four new foreign policy posts.

News of the appointment came a day after Ahmadinejad and the head of parliament met and said they would put aside differences that have exposed deep divisions among hardliners and prompted a warning from Supreme Leader Ayatollah Ali Khamenei.

“We are all one family and have one big mission. Administering the country is the focal point,” Ahmadinejad said.

Rahim-Mashaie, whose daughter is married to Ahmadinejad’s son, has become the focal point for infighting among the hardliners who rule the Islamic Republic.

A year ago Khamenei forced Ahmadinejad to sack him from the post of first vice-president amid fierce criticism from many conservatives who were particularly offended by his suggestion that Iran was a friend to all nations, including the people of Israel.

But the president managed to hang on to his charismatic political ally by making him chief of staff, a post in which he has remained a constant target of criticism.

That reached a crescendo earlier this month when Mashaie publicly upheld the idea of an “Iranian school” of Islam, which many religious conservatives considered highly controversial.

NOT WOUNDED BY FACTIONALISM

A senior cleric, Ayatollah Ahmad Khatami, accused him of “pagan nationalism” and some 200 members of parliament signed a letter of complaint to Ahmadinejad.

“The least we expected from Mr Ahmadinejad was to fire Rahim-Mashaie,” said another veteran cleric, Abdonabi Namazi.

Instead, by appointing him to one of four new foreign policy posts, Ahmadinejad has defied his conservative critics and shown he has not yet been politically wounded by the factionalism within Iran’s ruling right.

Analysts say the establishment in-fighting has become increasingly evident in recent months as opposition protests over Ahmadinejad’s disputed re-election in June 2009 have died down in the face of sometimes brutal repression.

While remaining chief of staff, Masahaie’s new role will be to counter the “domineering powers” that want to “preserve the status and existence of the Zionist regime (Israel),” according to a presidential decree published in Arman newspaper.

As well as naming a Middle East envoy, Ahmadinejad appointed three other allies into similar roles covering Afghanistan, Asia and the Caspian Sea area, showing his desire to improve relations in the region as Iran is shunned by many countries.

The United Nations Security Council passed a fourth round of sanctions against Iran in June, followed by tougher economic punishment from the United States and the European Union over concerns Tehran is seeking nuclear arms, something it denies.

Reuters: France, Britain and Germany have met a key...