Palestinian Authority lashes out at Ahmadinejad over remarks

AFP: The Palestinian Authority lashed out Saturday at Iranian President Mahmoud Ahmadinejad over his remarks about the relaunching of direct Israeli-Palestinian peace talks. 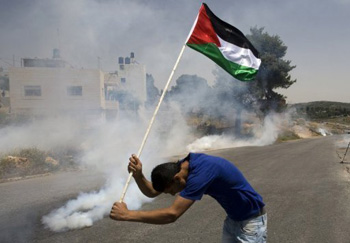 RAMALLAH, Palestinian Territories (AFP) — The Palestinian Authority lashed out Saturday at Iranian President Mahmoud Ahmadinejad over his remarks about the relaunching of direct Israeli-Palestinian peace talks.

The Iranian president, “who does not represent the Iranian people, who falsified elections and took power by fraud does not have the right to talk about Palestine, its president or its representatives,” Palestinian Authority spokesman Nabil Abu Rodeina said in a statement distributed by the official Palestinian news agency Wafa.

“We are defending our national rights and interests” and will not allow anyone to “threaten us or question the legitimacy of the Palestinian Liberation Organisation” led by president Mahmud Abbas, Rodeina added.

Calling Western-backed Abbas a hostage of Israel, Ahmadinejad said the talks begun Thursday with Israeli Prime Minister Benjamin Netanyahu in Washington lacked legitimacy as the Palestinian leader had no right to make concessions in the name of Palestinians.

“What do they want to negotiate about? Who are they representing? What are they going to talk about?” Ahmadinejad asked rhetorically about Abbas’ negotiating team during a rally Friday in Tehran.

Iran implacably opposes the new talks and has given strong support to the Islamist movement Hamas, which carried out two attacks against Israeli settlers in the occupied West Bank that killed four people and cast a pall over the talks relaunch.

Reuters: The United States and Russia agree they must...

ICJ Rules: US Sanctions on Iran Will Stay