Sunday Telegraph: Nato’s Secretary-General has urged the construction of a new missile defence system to protect Europe from the threat of Iranian nuclear attack.

Nato’s Secretary-General has urged the construction of a new missile defence system to protect Europe from the threat of Iranian nuclear attack.

By Nick Meo in Brussels 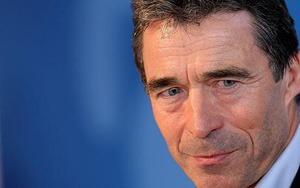 Anders Fogh Rasmussen told The Sunday Telegraph he has full American backing for a proposed €200 million (£165 million) defensive “shield”, which he hopes will be agreed in November at a summit of members in Lisbon.

He was speaking after weapons inspectors from the International Atomic Energy Agency (IAEA) warned last week that Iran had passed a crucial nuclear threshold which took it nearer to being able to arm ballistic missiles with nuclear warheads.

“Based on their public statements we know that Iran already has missiles with a range sufficient to hit targets in Europe, and they don’t hide the fact that they want to further develop their capability,” Mr Rasmussen said.

“If Iran eventually acquires a nuclear capability that will be very dangerous, and a direct threat to the allies. That is the reason why I am now proposing a new and effective Nato missile defence system.”

He claimed that the new system could be set up in cooperation with Russia, which has angrily opposed previous American attempts to set up missile shields in Europe.

Iran’s longest-range ballistic missiles, such as the Shahab-3 and the Qiam-1, have ranges of around 2,500 miles and could hit targets in Turkey and Greece.

Some will see the plan for a new missile shield as a tacit admission that America has rejected the risky option of launching air attacks on Iranian nuclear and military facilities, and given up hopes of deterring Iran from building a bomb, as Western governments believe it is trying to do.

Europe’s anti-missile defences at present largely consist of American-made SM-3 missiles, based on US warships, which would attempt to shoot down attacking ballistic missiles.

Speaking at his residence in a luxurious suburb of south Brussels, a day after returning from a meeting with President Barack Obama in Washington, Mr Rasmussen told The Sunday Telegraph that he believes that it would be relatively straightforward to set up a new defensive system. Under the plan, an anti-ballistic missile “shield” would be extended across Nato’s territory, coordinated by a new command and control system that would “knit together” existing radar and other sensor systems, with new SM-3 missiles based on land.

“In a nutshell we could build an effective missile defence system to protect all our population by connecting existing systems,” he said. “Even in a time of economic constraints it would cost very little – €200 million over 10 years, shared between 28 allies. For a modest cost we can protect 900 million citizens.

“If Nato decides to go ahead and develop a missile defence system it should be accompanied by an invitation to the Russians to cooperate. This would make sense from a security point of view. Realistically we would have a Nato system alongside a Russian system. We can develop cooperation mechanisms which would make the whole system more effective.

“No decisions have been taken yet. We will have consultation with Russia. We need effective protection against a real threat.” Supporters of the plan believe it could fundamentally alter the troubled relationship between Nato and Russia, ushering in a new era of cooperation.

Nato officials hope a less ambitious defensive system designed to cope with only a few attacking missiles would not antagonise Russia. They have already held talks with their Russian counterparts to set up a “security roof” which would link the missile defence systems of the US, other Nato countries, and Russia.

Early in his presidency Mr Obama scrapped his predecessor’s plans to site anti-ballistic missiles in Poland, with sensors to detect attacking missiles located in the Czech Republic, because of Russian anger.

Inspectors will also criticise Tehran in a report this week for repeated failure to co-operate with checks that material was held securely at Iranian plants, and the refusal of Iranian officials to answer questions about whether it was attempting to make a nuclear warhead.

In February the IAEA declared that it believed Iran was working on a nuclear warhead.

Not all missile experts are convinced Iran will pose a threat to Europe. Robert Hewson, editor of the industry publication Jane’s Air-launched Weapons, said: “Missile defence is more about shovelling money to American contractors than protecting people in Basingstoke.”

Afghanistan will be the main focus of the Lisbon Summit, and Mr Rasmussen said that he hopes to make a major announcement on progress in handing responsibility for security of provinces from Nato to Afghans— so-called transition.

“I hope to announce at Lisbon that transition is about to start,” he said. “I would expect a gradual transition process to start in 2011, and it would end by 2014.”

Nato had hoped to begin handing some of the less violent provinces to Afghan control before the November summit. Mr Rasmussen said the delay was not significant. “We have to make sure the process is irreversible,” he said.

In the week that Taliban leader Mullah Omar predicted Taliban victory, the Secretary-General said Nato would “stay the course” in Afghanistan.

“I understand very well that people are impatient and want to see progress. So do I. Progress would be gradually handing over Afghanistan to Afghan control. We will soon see concrete results with our new strategy.”