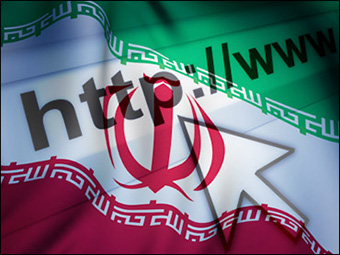 London, 5 Apr – The National Council of Resistance of Iran on Monday published a report on Iran’s ‘Cyber Army’. The report places the Cyber Force, which was created in 2009, within the state’s apparatus for crushing dissent in the country and fermenting trouble internationally.

Iran’s regime has long been aware of the threat posed to its control by a free internet. In May 2001 Ali Khamenei, the Supreme Leader, personally ordered a plan, “Broad Policies for the World Wide Web”, that sought to restrict internet access within permitted institutions.

Legal-washing of surveillance and censorship then followed in October 2001 when the Supreme Cultural Council of the Revolution chaired by President at the time Mohammad Khatami adopted the “Regulations and Rules Related to the World Wide Web”. These regulations permitted government control over Application Service Providers (ASPs) enshrining surveillance as a legal right of the regime.

In December 2002 a committee was formed with representatives from the Intelligence Ministry, the Ministry of Islamic Guidance, the Ministry of Communications and Technology and the Judiciary. By March 2003, the committee had blacklisted over 15,000 websites.

The exponential growth of the internet in the rest of the world has been matched by the fervour which the regime has clamped down on it. When Mahmoud Ahmadinejad became president in June 2005 the Communications Ministry was given a mandate to censor and suppress, citing “illegal content” and the need to “identify users that violate the law”.

“The cultural war is a serious threat to the regime. Since the IRGC’s core responsibilities include confronting all enemy threats against the essence of the regime, the IRGC has a duty to intervene in this regard.” (NCRI)

A collaboration between the IRGC Cyber Force and Technology Department of the Ministry of Intelligence in 2009 created Iran’s Cyber Army. The objective of which is to protect and preserve the regime through soft and hard means, the NCRI report said.

This formation was no doubt fostered by the 2009 uprisings and Student virus, which exposed weaknesses in the grip of the Iranian regime. In 2010 during Bassij week, Brigadier General Hossein Hamedani, commander of the Mohammad Rasulollah base in Greater Tehran, claimed that the Bassij council had over 1,500 active cyber warriors and that activities would be increased. It is thought that the Cyber Force works with the para-military Bassij to quell dissent domestically and the IRGC Quds Force on international and regional operations.

Timeline of Cyber Army attacks
• October 27, 2010 – It is claimed that hackers of the cyber army had sent disruptive emails and spread malware among the regime enemies’ computers. (NCRI)
• November 2, 2010 – The public relations office of the “Shabakeh Gostar” engineering company reported that Iran’s Cyber Army had taken responsibility for attacks against Twitter and the Chinese search engine Baidu. (NCRI)
• November 20, 2010 – The cyber army exaggerated its actions, launching a wave of psychological warfare in IRGC-affiliated websites, claiming that it had hacked 500 sites simultaneously, while disrupting the intelligence networks and private websites of other counties. (NCRI)
• 2012 – Iranian hackers reportedly target Bank of America, JPMorgan Chase and Citigroup throughout the year. (Reuters)
• August 2014 – Israeli reports that its internet infrastructure was attacked during Operation Protective Edge (Haaretz)
• February 2015 – Edward Snowden claims Iran has strengthened its capabilities by copying Western intelligence agencies methods. (The Intercept)
• March 31 2015 – Forty-four of Turkey’s 81 provinces suffer a 12 hour power outage, Iran is blamed but denies the accusations (Observer)
• March 2016 – The US Justice Department indicted seven Iranian citizens for distributed denial of service (DDoS) attacks against 46 companies (DoJ)

Read the full report from the NCRI here.

US expects Iran report to echo its concerns

AFP: The White House said Monday it expected a...