Bloomberg: Two Iranian grand ayatollahs issued fatwas calling for the killing of those who insult the Koran, including anyone who burns the Islamic holy book, the state-run Fars news agency reported. 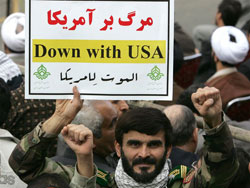 Sept. 13 (Bloomberg) — Two Iranian grand ayatollahs issued fatwas calling for the killing of those who insult the Koran, including anyone who burns the Islamic holy book, the state-run Fars news agency reported.

No one was specified in the decrees, which were issued by Nasser Makarem-Shirazi and Hossein Nouri-Hamedani in response to questions asked by student groups from universities in Tehran, Fars said. Such an action against any individual could only be carried out with the authorization of an Islamic religious judge, they said.

“Undoubtedly, the blood of a person who burns the Koran should be shed,” Makarem-Shirazi was cited by Fars as saying. Everybody should “strongly condemn” such an act.

A pastor from Florida planned to hold a Koran-burning event on Sept. 11 to mark the ninth anniversary of the 2001 al-Qaeda attacks on the U.S. Cleric Terry Jones of the Dove World Outreach Center, suspended and then canceled the act after an appeal by President Barack Obama.

“We feel that God is telling us to stop,” Jones said Sept. 11 in an interview with NBC’s “Today Show.” The move may open the way for talks with Imam Feisal Abdul Rauf, who plans to build an Islamic center near the World Trade Center site, Jones said.

Students who protested outside the Swiss Embassy in Tehran today set fire to the U.S. flag, the official Islamic Republic News Agency reported. The Swiss Embassy represents U.S. interests in Iran. They also destroyed a coffin that had the phrase “Liberal Democracy” written on it.

Jones, who has acknowledged receiving more than 100 death threats, said he “wasn’t scared into calling off the burning.”

Ceremonies, as well as protests for and against the Islamic center in New York, were held on Sept. 11 at the three sites where terrorists crashed the hijacked planes in 2001, killing almost 3,000 people.

A man was escorted by police from one of the protests after ripping pages from a copy of the Koran and setting them on fire, the New York Daily News reported. The man, who wasn’t identified by the newspaper, didn’t appear to have been arrested, the Daily News said.

Iran has been led by Shiite clerics since the 1979 Islamic Revolution that ousted the monarchy. The publication of “The Satanic Verses” by Salman Rushdie in 1988 prompted Iran’s then- supreme leader, Ayatollah Ruhollah Khomeini, to issue a fatwa condemning him to death for alleged blasphemy. The Indian-born writer spent nine years in hiding, living with guards in various locations in the U.K.

Reuters: Talks between Iran and world powers over Tehran's...

New York Times: The draft resolution, as summarized by...