AFP: An Iranian diplomat called Tuesday for an uprising against the Tehran government, as he became the third Europe-based envoy to defect this year and announced he was seeking asylum in Norway. 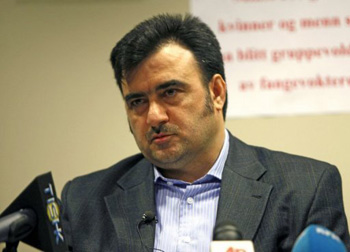 OSLO (AFP) — An Iranian diplomat called Tuesday for an uprising against the Tehran government, as he became the third Europe-based envoy to defect this year and announced he was seeking asylum in Norway.

“I’m seeking political asylum with all my family,” Farzad Farhangian, a press attache at the Iranian embassy in Brussels, told reporters in Oslo, adding he intended to join the opposition to President Mahmoud Ahmadinejad.

“I hope to be a voice of the opposition,” he added.

Farhangian, 47, is the third Iranian diplomat this year to seek protection in a Nordic country.

A senior official at the Iranian embassy in Helsinki, Hossein Alizadeh, told reporters Monday he was seeking asylum in Finland, and the ex-consul general of Iran’s embassy in Oslo, Mohamed Reza Heydari, was granted asylum by Norway in February after he resigned the previous month.

When asked how he had decided where to seek asylum, Farhangian said he had chosen to defect to Norway as Haydari was an old colleague.

“I’m hoping that in cooperation we will improve the campaign against the present government,” he added.

Haydari, who was present at Tuesday’s press conference, meanwhile told reporters: “I expect there will be more defections very soon.”

Farhangian also said he would support the use of violence in the struggle against the current adminstration in Tehran.

When asked if there should be a violent uprising, he answered: “yes, given the recent events I want it (the government) to be overthrown.”

Farhangian’s announcement came just days after his colleague in Helsinki Alizadeh said he would not return to Iran.

“I won’t go back to Iran because I could face capital punishment,” the former deputy head of mission for the Iranian embassy in Finland told reporters at the weekend, adding: “I will stay abroad as a political activist.”

The 45-year-old Alizadeh, who resigned last week, said he had received “unofficial threats” via email and that he was “going to request political asylum from the Finnish government.”

He delivered a blistering condemnation of Iranian President Mahmoud Ahmedinejad, saying he was neither the first nor the last diplomat to resign in protest over “fraudulent” elections and the subsequent crackdown on protestors in the country.

Alizadeh said he considered that “the whole regime has lost its legitimacy,” and he had quit his job to join the Green Movement, a coalition of opposition supporters who have been demanding new elections every since Ahmedinejad was re-elected in June 2009 amidst accusations of fraud.

After Heydari defected in January, Tehran also initially said he had not resigned and that his term had simply come to an end.

AFP: General David Petraeus, the head of US Central...