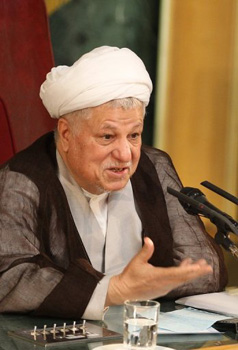 “Throughout the revolution, we never had so many sanctions (imposed on Iran) and I am calling on you and all officials to take the sanctions seriously and not as jokes,” the ILNA news agency quoted Rafsanjani as telling the six-monthly meeting of the Assembly of Experts, which supervises the work of Iran’s supreme leader.

The influential cleric, who heads the assembly and who is now seen as an opposition supporter, said Iran has never been in such a situation since the 1979 Islamic revolution, with “some states acting against” the Islamic republic and “some activating countries around us (to act) against” it.

“Over the past 30 years we had a war and military threats, but never have we seen such arrogance to plan a calculated assault against us,” Rafsanjani was quoted as saying in a separate report on the state television’s website.

“Never have we had so many resolutions from international institutions such as the UN Security Council and the IAEA (International Atomic Energy Agency) and governments against us.”

On June 9, the Security Council imposed its fourth set of sanctions against Iran for defiantly pursuing the controversial uranium enrichment programme.

The UN sanctions were followed by unilateral punitive measures by the United States, the European Union, Australia, Canada, Japan, and South Korea.

Rafsanjani’s comments come days after Iran’s supreme leader Ayatollah Ali Khamenei vowed to circumvent the sanctions, which President Mahmoud Ahmadinejad has dismissed as a “used hanky that should be thrown in the dustbin.”

“The nation and officials will undoubtedly circumvent the sanctions and render them ineffective just as (they have) in the past three decades,” Khamenei said on September 7.

All the four sets of UN sanctions have been imposed against Iran during the presidency of Ahmadinejad, a bitter opponent of Rafsanjani and who has infuriated the West by aggressively pursuing the uranium enrichment drive.

Rafsanjani was defeated by Ahmadinejad in the 2005 Iranian presidential election and political observers claim the two have been at loggerheads since the hardliner accused the cleric’s family of corruption in a television debate ahead of last year’s disputed presidential election.

On Tuesday, Rafsanjani, a two-time president, urged for caution while dealing with the current situation.

“We should examine the global situation and the path which would aggravate the situation as well as ways which would strengthen the Islamic republic,” he told the meeting.

AFP: Iranian authorities have blocked access within Iran to...

The Times: France today demanded the immediate release of a...