Cleric says sanctions in Iran are a threat

Washington Post: An influential former Iranian president on Tuesday criticized the government in unusually blunt terms, saying that it is not taking U.S.-led sanctions seriously enough and that Iran could become a “dictatorship.” 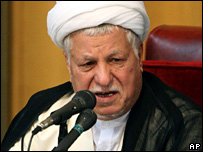 TEHRAN – An influential former Iranian president on Tuesday criticized the government in unusually blunt terms, saying that it is not taking U.S.-led sanctions seriously enough and that Iran could become a “dictatorship.”

The remarks by Ali Akbar Hashemi Rafsanjani represent a rebuke of President Mahmoud Ahmadinejad, though Rafsanjani did not mention him by name. Rafsanjani was also quoted by the semiofficial Iranian Labor News Agency as indirectly saying that the government is not adhering to the Islamic republic’s laws.

Ahmadinejad and his supporters have been under increasing pressure from multiple power centers in Iran.

A series of public disagreements between Ahmadinejad’s government and the parliament, influential clerics and even some of the president’s own ministers have led to a crisis atmosphere, which has heightened political tensions in the country.

The government has said the sanctions stemming from Iran’s controversial nuclear program have strengthened the Islamic republic. Ahmadinejad has called them “pathetic” and less effective than “a used handkerchief.” But business owners complain that the prices of raw materials are skyrocketing because of shortages.

“We have never been faced with so many sanctions,” Rafsanjani said at a meeting of an influential clerical council. “I would like to ask you and all the country’s officials to take the sanctions seriously and not as a joke.”

Rafsanjani and Ahmadinejad have long been rivals, and Rafsanjani was considered a behind-the-scenes force in the Green Movement that challenged the government after last year’s disputed presidential election. His words could be an opening shot that allows lower-level politicians to increase pressure on the president. Already, members of the parliament are hinting at a possible impeachment motion against Ahmadinejad. Iran’s supreme leader, Ayatollah Ali Khamenei, has called for a special mediation council to solve rising problems between the government and the parliament.

Rafsanjani warned that a “fifth column” was posing as supporters and enemies of Khamenei.

Ahmadinejad’s supporters have tried to purge Rafsanjani from the establishment, but he has strongly aligned himself with Khamenei, who in turn has publicly supported the president.

Speaking out during a meeting of the 86-member Assembly of Experts, a clerical council, Rafsanjani also deplored violent groups that in recent months have besieged houses of prominent clerics, the parliament and shops in the Tehran bazaar.

Calling those groups a “poison for the country,” Rafsanjani warned that “the enemy must be stopped . . . before we will face problems at the core.”

AFP: France will add its voice to protests by...