ANALYSIS-Iran’s Ahmadinejad ahead in political in-fighting

Reuters: Mahmoud Ahmadinejad’s list of enemies is long, spreading from his feud with the West to reformists at home to emerging rivals in his own hardline camp. But support from Iran’s strong Revolutionary Guards and Supreme Leader Ayatollah Ali Khamenei still ensures him the upper hand. 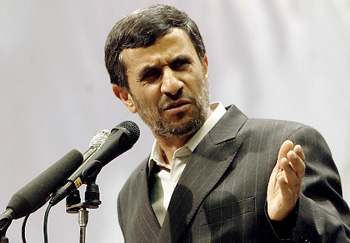 TEHRAN, Sept 20 (Reuters) – Mahmoud Ahmadinejad’s list of enemies is long, spreading from his feud with the West to reformists at home to emerging rivals in his own hardline camp. But support from Iran’s strong Revolutionary Guards and Supreme Leader Ayatollah Ali Khamenei still ensures him the upper hand.

Discord among the hardline rulers in the Islamic Republic has never been so public. The rift has little to do with Iran’s nuclear row with the West or the pro-reform opposition, which rejects Ahmadinejad’s 2009 re-election as rigged.

While little is known about what exactly transpires inside Iran’s labyrinthine power structure, analysts say if the conflict reaches deadlock, Ahmadinejad would still probably emerge the winner due to Khamenei’s backing.

So bad has the feuding inside the ruling camp become that Khamenei last month told faction leaders to stop their in-fighting, later making a public statement on the paramount need for unity, flanked by Ahmadinejad and his main rivals.

As a former Guards officer, Ahmadinejad also has invaluable support among the elite Revolutionary Guards and the volunteer Basij paramilitary force, which quelled the post-electoral anti-government unrest, the bloodiest protests in Iran in the past three decades.

Some senior clerics accuse Ahmadinejad of undermining the historical role of the clergy in the Islamic state, which is increasingly defined by the raw political power and dense network of business interests of the Revolutionary Guards, arguably the biggest winners from last year’s turmoil. Clerics played a key role in mobilising the masses that led to the 1979 Islamic revolution.

“…The institution of the … Guards has gradually eclipsed the institution of the clergy, in terms of their economic, political, and foreign policy influence,” said Karim Sadjadpour, an associate at the Carnegie Endowment in Washington.”… Iran is (now) more a military autocracy.”

Khamenei, Iran’s most powerful figure, appoints top commanders of the corps, which has always been loyal to the leadership and to the pillars of the revolution.

“… I don’t recall a single example of them being openly critical of Khamenei,” said Sadjadpour.

The opposition leaders have warned over the country being “militarised” by more power gained by the Guards corps, branded a Proliferator of Weapons of Mass Destruction by Washington.

The force is accused by the West of being involved in Iran’s nuclear and missile programme. Iran says its nuclear programme is aimed purely at generating electrical power.

Some hardliners have taken their distance from Ahmadinejad since the president and his closest ally have started to emphasise nationalistic themes, contradicting the guidelines set by the late founder of the revolution Ayatollah Ruhollah Khomeini, such as the primacy of Islam.

However, analysts say adopting a nationalist approach was purely a tactic adopted by Ahmadinejad to secure wider electoral support in Iran’s parliamentary election next year.

“He has lost the support of hardliners … Many Iranians have a strong sense of national identity,” said analyst Syrus Mashayekhi. “Ahmadinejad’s aim is to win their votes.”

The presidential vote and its aftermath have damaged the “legitimacy and influence” of Iran’s top leaders, said Sadjadpour.

“But Khamenei remains at the apex of Iran’s power pyramid,” he said. “His modus operandi has been to rule over people (elites) who despise one another but are loyal to him.”

The internal rivalries within the hardline camp, whose leading members often have business and political interests at stake, may further crack the cohesion of the ruling elite, analysts said.

A delay in releasing one of three Americans detained in Iran last year on spying charges was another illustration of the factional rivalries. The judiciary unexpectedly blocked Ahmadinejad’s personal intervention to free her, saying her legal process has not been completed. Sarah Shourd was eventually freed and left Iran last week.

The judiciary chief is a brother of parliament speaker Ali Larijani, one of the leading conservative rivals of Ahmadinejad.

“The public discontent is increasing … even some hardline people are losing their faith in the system,” said a political analyst, who asked not to be named.

Iran, although resource-rich as the world’s fifth largest oil exporter, is finally feeling the pressure as a fourth round of international sanctions aimed at curbing its nuclear ambitions begins to bite.

Coupled with popular discontent at high prices and growing inflation, and sharp criticism inside the establishment of the government’s populist economic policies, Ahmadinejad has a fight on his hands.

“Economic hardship, international pressure over the nuclear programme and public discontent may cause social unrest.”

The outcome of the rift may change Iran’s approach to the outside world, analysts and Tehran-based diplomats said.

“The rising power of the Guards may toughen Iran’s approach regarding the nuclear impasse or other foreign policy matters,” said a senior western diplomat, who asked not to be named.

But decisions on any major state matter ultimately lie with Khamenei, who has repeatedly stressed his views on “antagonising the enemy (the West)”.

“It does not matter whether the president is a hardliner or a reformist … major policies will remain the same … but tactics may change,” said analyst Reza Sehhat.