McClatchy Newspapers: Sen. Lindsey Graham of South Carolina said Monday that the United States must be prepared to use military force to prevent Iran from acquiring a nuclear weapon – and added that the last-resort step should be taken with the goal of overthrowing Iranian President Mahmoud Ahmadinejad. 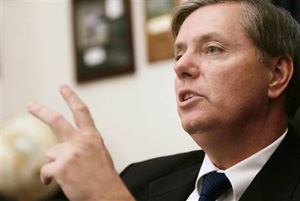 WASHINGTON — Sen. Lindsey Graham of South Carolina said Monday that the United States must be prepared to use military force to prevent Iran from acquiring a nuclear weapon – and added that the last-resort step should be taken with the goal of overthrowing Iranian President Mahmoud Ahmadinejad.

Graham, a military lawyer and a senior Republican on the Senate Armed Services Committee, became the first senator to support direct U.S. military intervention in Iran, saying it should not involve ground troops but be launched by U.S. warplanes and ships.

“If you use military force against Iran, you’ve opened up Pandora’s box,” Graham told the American Enterprise Institute in Washington. “If you allow Iran to get a nuclear weapon, you’ve emptied Pandora’s box. I’d rather open up Pandora’s box than empty it.”

Graham was a prominent supporter of the Iraq war, though he criticized Bush and former Pentagon chief Donald Rumsfeld for sending too few U.S. troops.

Aides to President Barack Obama on the National Security Council declined to comment Monday on Graham’s remarks about Iran.

State Department aides said Obama would discuss Iran on Thursday during his address to the U.N. General Assembly.

Graham said he believes Ahmadinejad “was lying” when he said Sunday in New York, after arriving for the U.N. General Assembly session this week, that Iran isn’t building a nuclear bomb.

“From my point of view, if we engage in military operations as a last resort, the United States should have in mind the goal of changing the regime,” Graham said. “Not by invading (Iran), but by launching a military strike by air and sea.”

Such an attack would be aimed not only at eliminating Iran’s nuclear capabilities, Graham said, but at rendering Ahmadinejad’s government powerless.

In order to prevent Iran from acquiring nuclear weapons, he said, a U.S. attack would be preferable to an Israeli attack because the American military is more powerful and more likely to achieve regime change.

Graham’s aides later said his reference to regime change entailed both the overthrow of Ahmadinejad and the removal of the Islamic clerics that many analysts believe at least partially control him.

The U.S. opposition to Teheran’s construction of a nuclear power plant in the southern Iran city of Bushehr dates to the Clinton administration in the 1990s.

Obama, like Presidents George W. Bush and Bill Clinton before him, has failed to persuade Russia not to help Iran build the Bushehr plant and then provide fuel for it. Iran and Russia say the plant, which recently began operating, will produce nuclear-fueled electricity for peaceful use.

The United States believes that Iran’s ultimate intention is to convert the fuel to weapons-grade plutonium in order to create nuclear arms.