Iran leader warns US of war with ‘no limits’

AFP: Iran’s President Mahmoud Ahmadinejad warned Tuesday that an attack on his country’s nuclear facilities could spark a war with “no limits”. 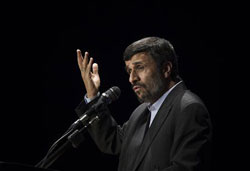 UNITED NATIONS (AFP) — Iran’s President Mahmoud Ahmadinejad warned Tuesday that an attack on his country’s nuclear facilities could spark a war with “no limits”.

Ahmadinejad also raised new questions about the Holocaust as he raised more controversy on his visit to New York for the annual UN General Assembly meetings.

“The United States has never entered a real war, not in Vietnam, nor in Afghanistan, nor even World War II,” the Iranian leader told American editors and reporters when asked about how Iran would react to any US supported strike by Israel on Iran’s nuclear facilities.

“War is just not bombing someplace. When it starts it has no limits,” the New York Times reported.

“Do you think anyone will attack Iran to begin with?” he said, according to Atlantic magazine’s website. “I really don’t think so. The Zionist regime is a very small entity on the map, even to the point that it doesn’t really factor into our equation.”

The UN Security Council has imposed four rounds of sanctions against Iran over its nuclear program. The United States and its allies have called for stringent application of the measures and Washington-Tehran relations have become increasingly fraught.

The western powers accuse Iran of trying to develop a nuclear bomb. Ahmadinejad denies the charge.

The Iranian leader said he was ready for nuclear talks with US President Barack Obama’s administration, but said “the whole outlook has to shift,” ABC News reported.

The UN sanctions had damaged the chances for an improvement in US-Iranian relations, he added.

Ahmadinejad blamed international politics for the growing tensions over the nuclear program. “Iran?s nuclear case is a political case,” the New York Times quoted him as saying. “Otherwise, why would it be essential for the details of our nuclear program be made available to the media?”

Ahmadinejad was again questioned about the killing of millions of Jews in Nazi death camps during World War II.

He described it as “a historical event used to create a pretext for war.”

“The question is, why don’t we allow this subject to be examined further…. It is incorrect to force only one view on the rest of the world,” he was quoted as saying.

“We need to ask, where did this event occur, and why should the Palestinian people continue to suffer for it? I am not an anti-Semite. I am anti-Zionism,” he said.

Ahmadinejad denied that Iran’s opposition movement faced persecution. “Those individuals face no problems, no difficulties,” he said. “They are all free in fact.”

Ahmadinejad went on to give a chaotic speech at the UN summit on the Millennium Development Goals in which he blamed capitalism for the world’s ills.

He soon broke off his presentation to complain about the lack of simultaneous translation to the UN assembly presidency.

The president resumed but at the end, the UN interpreters said they were only “reading from a translated text” in English and not following Ahmadinejad’s comments.

The hall was half empty. Canada’s delegation boycotted the speech but it appeared to be the only one to protest. In the past western ambassadors and ministers have walked out en masse.

Ahmadinejad called for fundamental reform of “the undemocratic and unjust” world order, according to a text distributed by the Iranian mission.

“Demanding liberal capitalism and transnational corporations have caused the suffering of countless women, men and children in so many countries,” he was quoted as saying.

Iran blocks use of tool to get around Internet filter

Reuters: Iranian authorities have blocked the use of most...