AFP: Iran’s President Mahmoud Ahmadinejad said Friday the UN should investigate the “true reason” for the September 11 attacks as he defended a speech which implicated the US government in the atrocity. 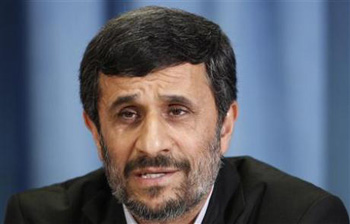 UNITED NATIONS (AFP) — Iran’s President Mahmoud Ahmadinejad said Friday the UN should investigate the “true reason” for the September 11 attacks as he defended a speech which implicated the US government in the atrocity.

“I did not pass a judgement, I simply made proposals for a humane solution to the problems that have risen as a result of 9/11,” Ahmadinejad told a press conference.

“We also want to bring to your attention that hundreds of thousands of innocent people in our region were killed as a result of 9/11.”

At a wide-ranging press conference in New York city where the World Trade Center once stood, Ahmadinejad made no attempt to pull back from the comments which President Barack Obama has called “hateful.”

The Iranian leader called on the United Nations to investigate the 2001 attacks in which almost 3,000 people died, when hijacked planes were flown into the World Trade Center, as well as the Pentagon and a Pennsylvania field.

“I did not pass judgement, but don’t you feel that the time has come to have a fact finding committee,” Ahmadinejad said defending his speech.

“An event occurred, and under the pretext of that event two countries were invaded and up to now hundreds of thousands of people have been killed as a result. Don’t you feel that that excuse has to be revised,” he said, referring to the conflicts in Afghanistan and Iraq which followed the Al-Qaeda attacks.

“Don’t you feel that if a fact-finding mission was present from the start to explore the true reason behind September 11 that we would not see the catastrophe of Afghanistan and Iraq today?

“Why do you assume that all nations must accept what the US government tells them?”

The Iranian president told the UN General Assembly on Thursday that there was a theory that “some segments within the US government orchestrated the attack to reverse the declining American economy and its grips on the Middle East in order also to save the Zionist regime.

“The majority of the American people as well as other nations and politicians agree with this view,” he said.

NEWSWEEK: Why we can no longer remain on the...