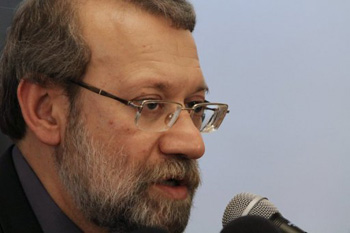 “How dare Obama announce that he wants to help the Iranian nation? He should know that he is an international villain,” Ali Larijani was quoted by ISNA news agency as saying during a visit to the southern city of Shiraz.

“The Americans are displaying an act that deserves an international evilness medal… Mr Obama should know that we do not need his message, what we need is to be able to trust the words he utters,” he said.

Larijani’s remarks came a day after the American leader told the BBC’s Persian service that the door for diplomacy with Tehran was still open over its long-standing nuclear dispute with the international community.

“Our strong preference is to resolve these issues diplomatically. I think that’s in Iran’s interest. I think that is in the interest of the international community,” Obama said.

“I think it remains possible, but it is going to require a change in mindset inside the Iranian government,” he said.

Asked if he was for or against the Iranian people in their struggle for greater freedoms, Obama said Washington supports democratic aspirations.

“The answer is that for those who aspire to have their voices heard, to participate in a democracy that recognises their human dignity — we will always stand with them.”

Relations between Tehran and Washington have become increasingly fraught since the Mahmoud Ahmadinejad’s presidency began in 2005, and over his defiant pursuit of Iran’s controversial nuclear programme.

Ahmadinejad, while attending the UN General Assembly session in New York this week, said Tehran was open to new nuclear talks provided the United States and Western powers were respectful to the Islamic republic.