Reuters: Iran has banned two newspapers for insulting political and religious figures, in a continued crackdown on dissent more than a year after a disputed presidential election. 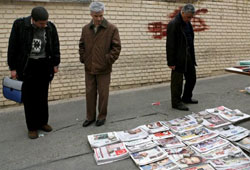 TEHRAN (Reuters) – Iran has banned two newspapers for insulting political and religious figures, in a continued crackdown on dissent more than a year after a disputed presidential election.

The news came a day after a court ordered the dissolution of two leading reformist political parties and at a time when leading opposition figures say their houses are coming under sporadic attack.

“Bahar Zanjan (weekly) has been banned for publishing articles insulting the country’s officials and some which are contrary to public morals,” Deputy Culture Minister Mohammad Ali Ramin was quoted as saying in Sharq daily.

Andishe-ye No, a pro-reform daily, was also closed under a law that prohibits insulting Iran’s supreme leader or other senior clerics with the revered status of “source of emulation.”

The managing director of Bahar Zanjan plans to appeal the ban which he said was based on “a clear lie and false accusation,” according to reformist website Kalame.

At least a dozen pro-reform publications and most opposition websites have been blocked since protests broke out after the re-election of hardline President Mahmoud Ahmadinejad in June 2009, making it difficult for opposition leaders to communicate with the public.

Earlier this month, security forces entered the office of the main opposition leader, Mirhossein Mousavi, and seized his computers, reformist websites reported. The home of another pro-reform leader Mehdi Karoubi was also attacked.

Time for the Media to End Its Silence on Vital Iranian Affairs, and MEK

By Pooya Stone The global media has been unfortunately...