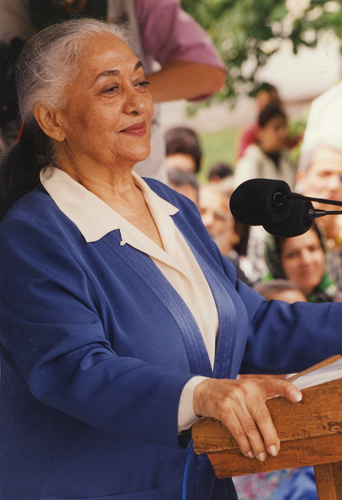 Ashraf os-Sadat Morteza’i, or “Marzieh”, had a legendry singing career which spanned some six decades. She died at the age of 86.

She left Iran and joined the main opposition coalition National Council of Resistance of Iran (NCRI) in Paris in 1994. She had not returned to Iran since.

She was known to Iranians of all generations for her songs which mixed traditionalism and culture with passion and contemporary issues.

In the NCRI, she was the arts advisor to Maryam Rajavi, President-elect of the coalition.

Marzieh entered the world of art in 1942. In a famous Iranian play, Shirin and Farhad, brought to the stage by the Barbad theatre company, she played the role of Shirin for 37 nights and was an immediate success. Her skill, technique and cognition were such that composers, song writers and poets competed to get her to perform their works. She was the first singer to take part in Tehran’s most prestigious program of the day, the Colourful Flowers. In the company of some of the most famous masters of Persian music, Marzieh performed more than 1,000 songs during her career.

Banned from singing in public following the 1979 Islamic revolution, Marzieh earned the wrath of Iran’s religious authorities by travelling to Camp Ashraf in Iraq in the late 1990s to live for several years alongside members of the opposition People’s Mojahedin Organisation of Iran (PMOI), the Tehran regime’s main nemesis.

In a statement, Maryam Rajavi expressed her sincere condolences to the Iranian people for the loss of “this great lady” and called for three days of mourning.

AP: An Iranian photographer who was anonymously awarded a...