Marzieh, Iranian singer and voice of dissent, dies at 86

New York Times: Marzieh, the great diva of Persian traditional song, who was silenced after the Islamic Revolution in 1979 but who re-emerged years later outside Iran as a singer and a highly public supporter of the resistance, died on Wednesday in Paris. She was 86 and had defected to France in 1994. 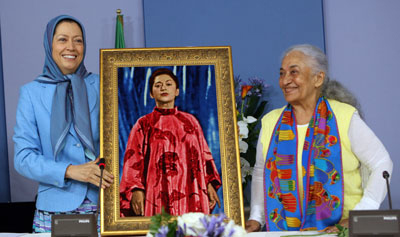 Marzieh, the great diva of Persian traditional song, who was silenced after the Islamic Revolution in 1979 but who re-emerged years later outside Iran as a singer and a highly public supporter of the resistance, died on Wednesday in Paris. She was 86 and had defected to France in 1994.

Her death, of cancer, was announced on the Web site of the National Council of Resistance of Iran, the opposition group, founded in 1981 and based in France, of which she was a member. Survivors include a son and a grandchild.

A household name in prerevolutionary Iran, Marzieh (pronounced mar-ZEE-eh) was as closely identified with her country’s music as the great Egyptian chanteuse Umm Kulthum was with hers. Marzieh began her career in the early 1940s and was for decades a ubiquitous presence on radio and in concert. Over the years she performed for many world leaders, including the Shah of Iran, Queen Elizabeth II, de Gaulle and Nixon.

Marzieh, whose rich, throaty mezzo-soprano was often likened to Édith Piaf’s, was famed for her vast repertory, said to span a thousand songs. She was known in particular for her expressive interpretations of songs of love — ill-fated love, unrequited love, everlasting love — many of which were settings of the work of the renowned Persian lyric poets of the Middle Ages and afterward.

Marzieh was born Ashraf os-Sadat Mortezai in Tehran in 1924. Her father, a moderate Muslim cleric, and her mother, who was descended from a family of artists and musicians, encouraged her to pursue a life in music. She studied for years with some of the greatest masters of Persian song before beginning her career in 1942 under the stage name Marzieh, a popular Iranian name meaning laudable or agreeable.

In 1979, after the shah was overthrown, Iran became a theocracy led by the Ayatollah Ruhollah Khomeini. The fundamentalist clerics who ran the country deemed the arts, including music, inimical to the new order. As an artist who was also a woman, Marzieh, doubly marginalized, was barred from performing. She retreated to her farm in the countryside and did not sing in public for a decade and a half.

During this period, the restrictions on female singers were relaxed to a degree, and Marzieh was told that she could appear before audiences of women only. She considered this stricture unacceptable, she later said, and continued her silence, practicing in private where no one could hear her.

“I sang for the birds, for the river, the trees and the flowers,” she told The Washington Times in 1995, “but not the mullahs.”

In 1994, while visiting Paris, Marzieh defected. She joined the National Council of Resistance of Iran and for several years afterward lived in Iraq, where an affiliated organization, the armed opposition group Mujahedeen Khalq, had a training camp. There, she sometimes sang atop a tank, dressed in military garb.

Her association with Mujahedeen Khalq drew criticism in the West and from some Iranian exiles. The group, which advocates the overthrow of the Iranian government, supported Iraq in the Iran-Iraq war of 1980-8.

Mujahedeen Khalq is on the State Department’s list of foreign terrorist organizations, although Britain and the European Union have removed it from their lists in recent years.

Marzieh, who was 70 when she defected, also resumed performing in public, starting with a concert at the Royal Albert Hall in London in 1995. She later sang in Los Angeles and in several European cities. She gave her last major performance in Paris in 2006, at 82.

Interviewers often asked Marzieh, who had been largely apolitical as a young woman, what had moved her to join the resistance. Speaking to the newspaper The Scotsman in 1999, she replied by quoting Rumi, the revered 13th-century Persian poet:

I am looking for that which cannot be found

For I am fed up with beasts and ogres

And I yearn for a human being.

By Jubin Katiraie In the last few days, courts in...

Top US official slams Germany over trade with Iran

AFP: The top US official for arms control, John...