CNN: Iranian President Mahmoud Ahmadinejad is taking a hard line ahead of nuclear talks scheduled for next month with world powers skeptical of his government’s intentions, local media reported Sunday. 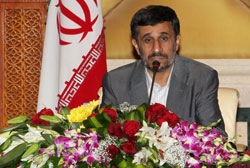 (CNN) — Iranian President Mahmoud Ahmadinejad is taking a hard line ahead of nuclear talks scheduled for next month with world powers skeptical of his government’s intentions, local media reported Sunday.

Ahmadinejad said that Iran is ready to hold talks, but warned that his country won’t yield any of its international rights to peaceful nuclear energy development, according to the reports.

“Holding talks with Iran is the best choice for you,” Ahmadinejad was quoted by state-run Press TV as saying at a rally in Ardebil in northwestern Iran Sunday. “You have no other option. All the other ways are closed. You know the fact very well,”

The United States and other world powers fear Iran is developing a nuclear program for military purposes. Iran has denied those allegations.

“You should make it clear that what is your aim of negotiations, friendship or hostility? Do you want to follow logic or law or issue resolution and make threat?” the semi-official Iran Student’s News Agency quoted Ahmadinejad as saying. He added that Western powers should also pressure Israel over its undeclared but widely-suspected nuclear capability, ISNA said.

Last month, Ahmadinejad said an Iranian representative would meet with the “P5 plus one” group. The group is made up of the five permanent members of the United Nations Security Council — the United States, Britain, France, China and Russia — along with Germany.

Nuclear talks between Iran and the six powers have been stalled since October 1, 2009, when the two groups last met in Geneva.

The EU has proposed the two sides meet again in mid-November back in Geneva. Manouchehr Mottaki, Iranian foreign minister, said Saturday that November 15 had been suggested for a meeting date.

It may be a sign that Tehran is feeling the bite of increased sanctions imposed in recent months to pressure a return to talks.

Iran is now subject to four sets of U.N. sanctions, while the United States and the EU have also imposed separate penalties on Iran over its refusal to stop enriching uranium.

Still, Ahmadinejad said Iran is not weakening in its resolve, “They thought they can weaken the Iranian nation through imposing sanctions and posing threats, but Iranians have showed integrity, convergence and strength,” he told Press TV.

It claimed that during the six months since March 21, trade had climbed to $9.3 billion. China accounted for most of Tehran’s trade with the group.

Imports fell sharply from the United States, but exports to America more than doubled to $77 million, leaving Iran with a small trade surplus with the world’s largest economy.

CNN’s Brian Walker and Mitra Mobasherat contributed to this report.

Reuters: The head of the U.N.'s nuclear watchdog, Mohamed...

Still no help for Iranian dissidents

The Hill: Consider three principles. First, in Plato’s Republic, one...