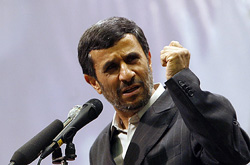 A harshly worded article in the Guards’ monthly magazine echoes criticism of Ahmadinejad from other parts of the Iranian establishment and shows attempts to mend rifts within the Islamic Republic’s ruling elite have yet to work.

Ahmadinejad and his close aides have faced criticism from lawmakers, the judiciary and some powerful clerics for saying parliament is no longer at the centre of affairs and promoting an “Iranian” rather than an “Islamic” school of thought.

In an article entitled: “Is parliament at the centre of affairs or not?”, the magazine, Payam-e Enghelab (Message of the Revolution), asked: “Does being on top justify whatever action the government thinks is right, disregarding the law?”

Re-elected in June 2009, Ahmadinejad faced down huge demonstrations from an opposition movement which says the vote was rigged, something he denies. Divisions among the hardliners have become more apparent in the months since the protests were put down, through sometimes violent repression.

The Iranian Revolutionary Guard Corps has its own navy, air force and command structure separate from the regular armed forces. Along with its voluntary militia, the Basij, it played a key role in quelling the post-election unrest which was the worst seen since the 1979 Islamic revolution.

The rifts prompted Supreme Leader Ali Khamenei to call for all branches of government to support the president whose government he has hailed as extremely successful.

“National unity is very important and must be strengthened with every passing day… and by that I am addressing both officials and ordinary people,” Khamenei said during his recent visit to the holy city of Qom.

But Payam-e Enghelab’s criticisms were similar to those voiced by parliament, the judiciary and clerics.

“Dealing with marginal and unnecessary issues by some politicians has become the country’s main issue,” the magazine said, referring to the controversy about the “Iranian” school of thought which many of Ahmadinejad’s fellow conservatives say smacks of secular nationalism.

“Adopting these kinds of stance has no benefit but creating separation and division in the Islamic Revolution front and casting doubt about fundamental stances,” it said.

The harshest words were about Ahmadinejad’s remark about parliament’s reduced power, which some critics have said was a contradiction of the stance of Ayatollah Ruhollah Khomeini — the deeply revered late leader of the Islamic Revolution.

“The superficial interpretation of Imam Khomeini’s remarks and changing them in a way that meets a few people’s interests for a short time is an irreparable mistake,” it said.

Indignation about Ahmadinejad’s apparent disregard for parliament has pushed some former rivals within the legislature — in the hardliner “principlist” camp and more moderate “reformists” — closer together.

“The prominent figures of principlists and reformists have formed an unwritten alliance,” Ali Motahari, a prominent hardline MP who is an outspoken critic of Ahmadinejad, was quoted as saying by the reformist Sharq newspaper on Tuesday.

The pressures on Ahmadinejad from within the hardline camp at home comes as Iran faces tighter economic sanctions aimed at curbing its nuclear programme which some countries fear is aimed at making a bomb, something Tehran denies.

Iranians are also bracing themselves for the impact of Ahmadinejad’s cornerstone economic plan: slashing billions of dollars of subsidies for essentials like food and fuel.

Economists outside Iran have said sudden hikes in prices of items like gasoline — likely to happen in the coming weeks — could reignite popular unrest. Politicians within the Islamic Republic have warned of “economic sedition” as opponents of the regime seek to stir trouble.

Mirhossein Mousavi, the opposition leader who lost the 2009 election, said an increased police presence in recent days was a government attempt to intimidate anyone thinking of protesting. The police have said it is conducting a crackdown on crime. (Writing by Robin Pomeroy; Editing by Samia Nakhoul)

Iran warns West not to use NPT as political tool