RFE/RL: It is easy to spot the nearly three-acre campus of Khatam-al Nabyeen Islamic University in western Kabul. 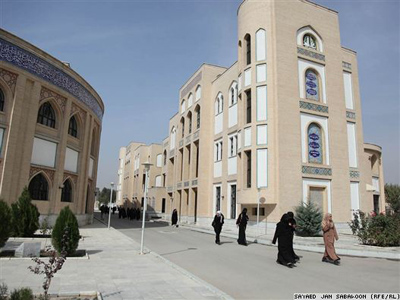 It is easy to spot the nearly three-acre campus of Khatam-al Nabyeen Islamic University in western Kabul.

The madrasah, or religious school, which opened four years ago, still appears brand new. Its complex of mosque, classrooms, and dormitories is built in a classic Central Asian architectural style, giving it a timeless feel.

But the school is noteworthy for other reasons. Built at a cost of some $17 million by one of Afghanistan’s most Iran-leaning clerics, it is one of Tehran’s lesser noticed, but most effective efforts to build influence in Afghanistan.

Sometimes Iran’s role in Afghanistan is open and transparent, sometimes it is secret, and at other times — as in the case of the madrasah — it is somewhere in between.

An example of Iran’s open role is its pledge of $500 million in aid as an international donor. Tehran has built, among other projects, a road linking the Iranian border to the western city of Herat, and donated $800,000 to Kabul University’s dentistry facility.

An example of Tehran’s clandestine effort to build influence is its recently exposed cash payments to some Afghan politicians. Last month, Afghan President Hamid Karzai acknowledged that his chief of staff had received sometimes as much as $1 million at a time, some of it stuffed in bags, but said the payments were “transparent” and aimed at helping cover official presidential expenses.

By contrast, the new Khatam-al Nabyeen Islamic University in Kabul has no declared pledge of funding from Iran, nor is there a proven secret money trail to Tehran. Instead, the madrasah wins hearts and minds while leaving Iran’s hand noticeably but ambiguously in the background.

The approach becomes clearer with a visit to the university itself. As the teachers and students — who welcome visitors — describe the facility, references to Iran are plentiful even though there are no Iranians in sight.

Student Mohammad Taqih Masbah, speaking to RFE/RL’s Radio Free Afghanistan during a recent visit, says, “Our teachers are all Afghans who studied in Iran and other foreign countries.”

Masbah is one of a total of some 1,000 men and boys who come to the madrasah in the afternoon to study Islam and discuss the Koran.

In addition, there are some 200 full-time boarding students at the school, plus another 200 female students who come each morning to study in a separate women’s department.

References to Iran equally crop up when speaking to the librarian, Ruhollah Kazimi. He says the library today contains 100,000 books but will eventually grow to 400,000.

“Eighty percent of the books are sent by Afghan refugees in Iran. The rest are from foreign governments including Iran or were bought by the school itself,” Kazimi said.

The books — all on religious subjects — enable Khatam-al Nabyeen University to teach a curriculum almost indistinguishable from those of madrasahs in neighboring Iran.

Critics say that makes the university a vehicle for spreading Iran’s influence over Afghanistan’s Shi’ite community, even as the university is wholly Afghan in its leadership.

Alireza Nourizadeh, director of the Center for Arab and Iranian Studies in London, says, “They have the same books, the same sort of lessons, and they all believe in, they have to believe in, Khamenei as the Velayat-e faqih [supreme religious expert] or Khamenei as the representative of the disappeared imam, the 12th Imam.”

“So, we are talking about a very exclusive and comprehensive program in which a young man from a remote village in Bamian or any other part of Afghanistan comes to that school and within six or seven years he becomes totally a man who is ready to die for Khamenei and for his ideas,” Nourizadeh said.

The university’s founder, Grand Ayatollah Mohseni, is a 75-year-old cleric and former mujahedin leader whom Tehran has helped propel to greater prominence in recent years. The Iranian government is widely reported to have provided engineering help and supplies of programming to enable Mohseni to open a television station, Tamadon (Civilization).

Britain’s daily “The Guardian” described the television network in April 2009 as having “a visual outlook and religious content remarkably similar to Iranian state-run television channels.”

Just where the money comes from for Mohseni’s projects is uncertain. Critics of the cleric maintain he receives millions of dollars from Iran. But the cleric himself says that his capital is left over from aid he received from several countries, notably Pakistan, during the jihad years plus money donated by his Shi’a followers.

In Shi’ism, each believer chooses a grand ayatollah as his model for emulation and is supposed to contribute a fifth of his income as tithes to support that ayatollah’s Howsa, or center of religious learning.

Whatever the source of funding, it is clear that Mohseni, born in Kandahar, has deep ties to Iran and its religious establishment in Qom.

Nourizadeh says the cleric studied for many years in Iran and received his title of grand ayatollah after his religious scholarship was recognized by several Iranian marjah, or top religious leaders. However, he is not recognized as a grand ayatollah by top religious leaders in Shi’ism’s other great religious center, Najaf. That, Nourizadeh says, makes Mohseni wholly dependent for his title upon the Iranian clergy and, specifically, upon top clerics who today are close to Iranian Supreme Leader Ali Khamenei.

Such a close relationship by itself might be enough to make Mohseni a controversial leader within Afghanistan’s Shia community, which itself is divided over the question of whether to recognize the Iranian Revolution’s guiding principle of following a supreme leader, who today is Khamenei. Many Afghan Shi’a are loyal instead to grand ayatollahs in Qom or Najaf who do not embrace that concept.

But Mohseni is controversial for other reasons, as well, notably his view of women’s rights. Those views made global headlines earlier this year when a so-called “Shi’ite family bill” was pushed through parliament and signed into law by Karzai.

The bill, which set conditions for when women can exit the house without a husband’s permission and empowered husbands to punish their wives if they withhold sexual relations, sparked clashes between protesters and counter-protesters in which several people were injured. Karzai retroactively indicated he had signed the law without reading it sufficiently and sent it back to parliament for further consideration, leaving its future uncertain.

Hadji Mohammad Amin Frotan, a writer and expert on Afghanistan now living in Holland, calls Moheseni a divisive figure for his views on women’s rights.

“Women Personal Rights [Ahwal-e-Shakhsia] was introduced by Shaikh Asif Muhsini. The whole context of the by-laws is shameful. This by-law allows oppression of women,” Frotan said.

Mohseni dismisses such criticism by saying his “family law” assures the freedom of women and protects their rights better than do Western societies, where marriage is less sacrosanct. He also says that foreign countries used their influence and money to force the Shi’ite family bill back to parliament after it already had passed into law.

But more broadly, Mohseni rejects any notion that he is a divisive figure. He told Radio Free Afghanistan this week that both Shi’ite and Sunni students study at Khatam-al Nabyeen.

“In this academic institution, a great number of our Sunni and Shi’a brothers and sisters study together. We thank God that we have created councils of brotherhood in Afghanistan. Once each week Shi’as and Sunnis are gathering and become united. We have to be vigilant and not let the foreigners influence us under different names,” Mohseni said.

He also said that the madrasah is intended to meet all the needs of Afghan students so that there is no need to go abroad for religious education. The statement suggests his ultimate aspiration may be to establish Kabul as a major center of Shi’ite learning that one day might take its own place alongside Qom and Najaf.

As students graduate from the madrasah, they will go on to become teachers throughout the country. Mohseni has told the Afghan media previously that “I believe that just as every district needs one doctor, so they need at least on Mujtahid [Shi’ite religious authority].”

But the extent to which the graduates will also spread the Iranian Revolution’s version of Shi’ism — with its recognition of a supreme leader in Tehran — is what many outside observers will be watching most. As observers do, they will have in mind other countries where Iran has provided aid to strengthen and build allied revolutionary parties like Hizballah, and wonder if this is Iran’s eventual aim in Afghanistan, too.

Today, Khatam-al Nabyeen cannot be said to be Iran’s direct arm in Afghanistan. But Tehran’s ability to find and boost a natural partner seems to have given it the next best thing: an ally who can advance Iranian goals by making them appear to be Afghan ones instead.

With reporting from Hashem Mohmand in Prague and Zhakfar Ahmadi in Kabul.

Iran says no negotiation based on uranium suspension

AFP: Iran on Saturday stressed it will not negotiate...