AP: Iranian President Mahmoud Ahmadinejad said Thursday that embargoes are ineffective and the West should drop its aggressive approach if talks on Tehran’s nuclear program are to be successful. 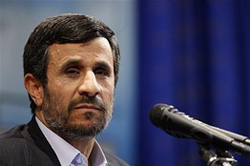 BAKU, Azerbaijan (AP) — Iranian President Mahmoud Ahmadinejad said Thursday that embargoes are ineffective and the West should drop its aggressive approach if talks on Tehran’s nuclear program are to be successful.

Ahmadinejad said at a Caspian Sea summit in Azerbaijan that Iran is ready to return to six-party talks on its atomic energy program, which the West suspects may be directed at creating nuclear weapons. Iran denies that, saying it is for energy purposes.

Talks between Iran and world powers Russia, the U.S., Britain, France, China and Germany are expected to restart Dec. 5, but a venue is still to be determined. Ahmadinejad suggested Istanbul, while the West wants Geneva.

“If they want their negotiations to be successful, they must reject their exploitative approach. If they take the side of justice, then we could reach certain results, and could cooperate on world issues,” he said.

“But, if they want to talk to us using old methods, then they must know that the results of negotiations will remain the same. Iran has chosen its own path.”

He added: “Iran won’t be scared by embargoes.”

Iran is the subject of multiple U.S. and U.N. sanctions, including weapons and other trade restrictions.

Last week, U.S. Defense Secretary Robert Gates said the latest international sanctions are hitting Iran harder than that country’s ruling regime had expected, and they should be allowed more time. He also said although military action against Iran remains an option, the threat of force is not the only way to stop Iran from building a nuclear bomb.

On another issue, Iran has enraged human rights activists by sentencing a woman suspected of adultery to death by stoning.

Ahmadinejad defended the prosecution of 43-year-old lawyer Sakineh Mohammadi Ashtiani, whose case is being reviewed by the country’s supreme court. She faces the prospect of death by other means if the stoning sentence is revoked. The U.S. and the EU have urged a stay of execution.

“Why is it that in America they execute people and no one says a thing?” Ahmadinejad said. “In America it is considered a defense of human rights, and in Azerbaijan or Iran it is a violation of human rights,” he said.

Ahmadinejad was silent on the case of two German journalists who were arrested last month on suspicion of spying while interviewing Ashtiani.

Reporters Without Borders called for the immediate release of the two men, reporters on assignment from the German Bild am Sonntag newspaper. The Iranian government has said the pair admitted entering Iran on tourist visas instead of on the journalist visas that foreign reporters must have to work legally in the country.

BBC: Bolivia has apologised to neighbouring Argentina for inviting...