Iran’s military looks to the sky as new priority

AP: In military maneuvers and air shows, Iran has been proudly touting advances in its air forces and defenses, including radar systems, anti-aircraft batteries and new attack and reconnaissance drones. 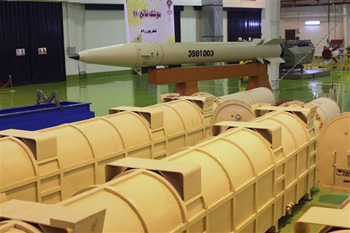 It’s a sign of a new priority for Iran’s military — trying to quickly bolster its ability to patrol its skies in the belief that U.S. or Israeli warplanes or missiles could strike its nuclear facilities.

But Iran’s highly publicized unveilings of air systems in recent months — including an armed drone dubbed the “ambassador of death” — have not yet translated into any significant tactical gains for the Islamic Republic, defense analysts say.

For the most part, Iran’s air attack capabilities still depend heavily on domestically modified versions of long-outdated warplanes, including former Soviet MiGs and American F14A Tomcats from the 1970s, and its anti-aircraft batteries and drones remain untested, the analysts say.

“What we see from Iran is a lot of show and a lot of talk, but nothing that comes close to being a game changer,” said John Pike, director of the security analyst group globalsecurity.org based in Alexandria, Virginia.

Still, Iran clearly is trying to close security gaps around nuclear sites — including Iran’s main uranium enrichment lab — and blunt the edge that the Pentagon and Israel gain from drone technology. Iranian commanders now view drones as a critical tool, including to monitor the U.S. 5th Fleet based across the Gulf in Bahrain.

The Americans have confirmed they’ve shot down an unspecified number of Iranian surveillance drones over Iraq. Iran, meanwhile, has boasted that its drones have taken reconnaissance photos of U.S. warships in the Gulf.

Iran’s other military emphasis has been improving its long-range missile program. Washington believes Iran may have obtained advanced missiles from North Korea, known as BM-25, which could extend the strike range for Iran from the known 1,200 miles (1,900 kilometers) to up to 2,400 miles (4,000 kilometers), according to State Department cables obtained by the website WikiLeaks and made public Sunday. Such missiles could hit well beyond Iran’s top regional enemy Israel and into Europe or Russia.

But the Iranian effort to build up its air power is mostly a homegrown project, tweaking older technology or using domestic know-how to build its first generations of drone spy and attack aircraft. It comes at a time when its rivals across the Gulf, led by Saudi Arabia, are on buying sprees to modernize and expand their own air power.

Iran learned the risks of relying on outside help this year when Russia canceled the delivery of an advanced S-300 anti-aircraft system, saying it was banned from selling them to Tehran by U.N. sanctions.

During five days of military exercises in November, Iran claimed it successfully tested an air defense missile battery built from a previously obtained Russian S-200 anti-aircraft system that it claimed was upgraded to the level of the S-300. The Iranian version launches a modified version of America’s 1970s-era Hawk missile.

The maneuvers also included simulations of attacks on Iran’s nuclear sites. Afterward, the head of the Revolutionary Guard, Brig. Gen. Mohammad Ali Jafari, claimed last week that his forces are “more prepared than ever before” to counter military threats.

But many Western military observers say Iran is still just trying to squeeze what it can from decades-old weapons.

“What Iranians have produced isn’t really much more advanced than systems other nations deployed in the late 1970s,” said James Lewis, director of technology and public policy program at the Center for Strategic and International Studies in Washington. “There is a lot of bluster and exaggeration. The real purpose is political — to show that they can defend themselves, exert power in the region and aren’t deterred by the embargo.”

Before the 1979 Islamic Revolution, Iran’s air forces were considered second only to Israel in the Middle East, built up by aid from the country’s then-ally the United States. But after the ouster of the pro-American shah, the new ruling clerics purged the combat pilot ranks and strongly emphasized ground troops during the grinding 1980-88 war with Iraq.

Its standing forces remain its military centerpiece, including a regular military, the even better-equipped Revolutionary Guard with 120,000 personnel and an estimated 1 million volunteer militia fighters known as Basiji.

But Iran restructured its military last year in an effort to improve its air defenses. Supreme Leader Ayatollah Ali Khamenei ordered a new branch to be split off from the air force to deal exclusively with threats to the country’s airspace.

Since then, Iran has invested heavily in advances in surveillance and attack drones.

In August, Iranian President Mahmoud Ahmadinejad unveiled the latest addition to the country’s drone fleet: a 13-foot-long (four-meter-long) unmanned aircraft — called the “ambassador of death” — which can carry up to four cruise missiles with a claimed range of 620 miles (1,000 kilometers).

That’s still short of Israel’s borders. Many analysts believe a longer-range drone is the logical next step.

“It is more than likely that (Iran) will attempt to launch reconnaissance drone-sorties against Israeli territory at a time of their own choosing,” wrote Paul Rogers, a professor at Bradford University in Britain and a frequent commentator on security affairs. “The military effect will be minimal, but the political impact will be very great.”

Alex Vatanka, a senior Middle East analyst at Jane’s Information Group, sees Iran’s military engineers remaining committed to long-range missiles — which now have a reported ranges that cover Israel and most of the Middle East.

But he notes that Iran has shown an “appreciation of the strong and growing utility of (drones) both in terms of surveillance and as firepower” with U.S. forces sandwiching Iran from Iraq and Afghanistan.

“Its about prestige,” he said. “The Iranians see what the US has done with these platform in Afghanistan and Pakistan or what the Saudis have reportedly been able to do in Yemen.”