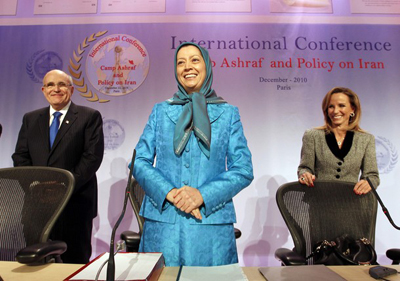 PARIS – A group of prominent U.S. Republicans associated with homeland security told a forum of cheering Iranian exiles here Wednesday that President Obama’s policy toward Iran amounts to futile appeasement that will never persuade Tehran to abandon its nuclear projects.

“Appeasement of dictators leads to war, destruction and the loss of human lives,” Giuliani declared. “For your organization to be described as a terrorist organization is just really a disgrace.”

The four GOP figures appeared at a rally organized by the French Committee for a Democratic Iran, a pressure group formed to support MEK.

Their crowd-pleasing appeals, they said, reflected growing bipartisan sentiment in the U.S. Congress and elsewhere that the 13-year-old terrorist designation of the Paris-based dissident group should be ended because it is unfounded and has not made the Iranian government easier to deal with or halt its nuclear program. In addition, they noted, a Washington federal appeals court in July ordered Secretary of State Hillary Rodham Clinton to review the listing, and cast doubt on some of the information brought forward to support it.

The group, the largest and most active Iranian exile organization, was added to the list in 1997 as part of an effort by President Bill Clinton’s administration to reach out to Tehran. It has been maintained since, apparently to avoid antagonizing the Iranian leadership while the United States fought wars in Iraq and Afghanistan.

The accusations against Obama, while consonant with other conservative statements on the matter, seemed particularly starkly worded.

More explicit, Mukasey urged the Obama administration to offer “all possible technical and covert support to those fighting to end oppression in Iran.” He added, “What it has done and what it is doing is nothing less than an embarrassment.”

All four speakers equated the exile group with the Iranian opposition, saying it must be supported to help get rid of the government headed by President Mahmoud Ahmadinejad and overseen by a committee of senior Shiite Muslim scholars. Only then, they said, can the world be certain that Iran will not develop nuclear weapons and threaten the Middle East.

“The United States should not just be on your side,” Giuliani said. “It should be enthusiastically on your side. You want the same things we want.”

Reports from Iran have noted, however, that the outpouring of opposition after last year’s contested election revolved around unsuccessful presidential candidates who live in Iran and not the Paris-based MEK. The exiles lost much of their following in the country after their armed faction, which was based in Iraq, functioned as a division of the Iraqi army during the Iran-Iraq war in the 1980s.