CNN: After meeting Thursday with Turkey’s president in advance of multinational discussions on Iran’s controversial nuclear program, Iranian President Mahmoud Ahmadinejad said he hopes the talks will be productive but stressed that international sanctions “have no impact on Iran’s decision-making process” and “have always failed.” 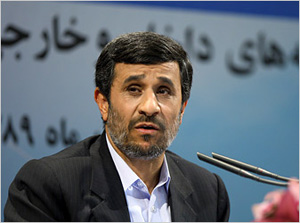 Istanbul, Turkey (CNN) — After meeting Thursday with Turkey’s president in advance of multinational discussions on Iran’s controversial nuclear program, Iranian President Mahmoud Ahmadinejad said he hopes the talks will be productive but stressed that international sanctions “have no impact on Iran’s decision-making process” and “have always failed.”

Ahmadinejad and Turkish President Abdullah Gul, along with ministers of the two countries, met separately Thursday after the 11th summit meeting of the Economic Cooperation Organization at the Ciragan Palace in Istanbul. Leaders and delegations from Afghanistan, Pakistan and other Central Asian countries also attended the summit, whose aim was to promote regional economic development and cooperation among member states.

Discussions between Iran and what is known as the P5 plus 1 — the five permanent members of the U.N. Security Council (the United States, Britain, France, Russia and China) plus Germany — are to be held in Istanbul in late January. This second round of talks was agreed to after two days of discussions between Iran and the six-nation group earlier this month in Geneva, Switzerland.

Though Turkey will have no direct role in the January discussions, “It is in our advantage as well as Iran’s that the matter is resolved through diplomatic ways,” Gul said.

“Turkey has important contributions. It is important that progress is made in the content of these meetings,” he added.

The United States, other Western countries and Israel fear that Iran wants to develop nuclear weapons, an allegation Tehran has steadfastly denied, saying its nuclear program is strictly for peaceful purposes. Iran already faces stiff sanctions from the international community because it has continued to enrich uranium.

“We hope the Istanbul meeting becomes a good meeting with lasting results,” Ahmadinejad said during a news conference Thursday. However, he said, “Sanctions have no impact on Iran’s decision-making process … and sanctions have always failed. … Our enemies cannot harm our very strong economy by imposing sanctions on Iran.”

In a speech during the summit, Gul, who now assumes the rotating presidency of the Economic Cooperation Organization, succeeding Ahmadinejad, pointed to the low levels of economic cooperation among the ECO countries and said: “We need to develop the region and give back its former glory,” referring to the ancient silk and spice roads that ran through Central Asia.

Gul also called on member states that have not yet signed the Economic Cooperation Organization Trade Agreement to sign it.

A declaration was issued at the end of the summit calling on member countries to have closer economic cooperation.

The Turkish president, during a news conference, called the summit “very productive.” He said Iraq made a bid to join the organization, which was welcomed by the member states.

Azerbaijan will host the next organization’s summit in 2012.

Reuters: France urged Iran on Wednesday to adhere to...