Bloomberg: Margaret Thatcher tried to use the political capital gained from the successful ending of a siege of Iran’s embassy in London to persuade Ayatollah Ruhollah Khomeini to release U.S. hostages held in Tehran, secret British files from 1980 show. 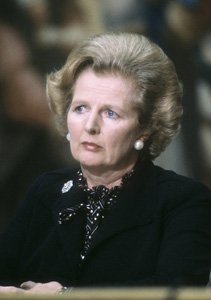 Dec. 30 (Bloomberg) — Margaret Thatcher tried to use the political capital gained from the successful ending of a siege of Iran’s embassy in London to persuade Ayatollah Ruhollah Khomeini to release U.S. hostages held in Tehran, secret British files from 1980 show.

The government documents, released by the National Archives after 30 years, show how Middle Eastern diplomats in London continued to debate whether to attempt to intervene in the six-day siege, unaware that Special Air Service soldiers were already storming the building, which had been seized by Iranian dissidents on April 30.

While the successful SAS raid, in which 19 hostages were freed, helped build Thatcher’s reputation as an uncompromising leader, in private she took a conciliatory tone with Khomeini, Iran’s supreme leader. She asked that he order the release of the American hostages “as a gesture of goodwill to the brave men who risked their lives to free the Iranian hostages.”

Other documents released today reveal Thatcher’s conviction that Bank of England Governor Gordon Richardson was blocking her economic policy, British diplomats’ vision of a Ronald Reagan presidency, and Foreign Secretary Peter Carrington’s insistence that notes to him be printed on pink paper.

The May 5 storming of the Iranian embassy, in the course of which five terrorists were killed for the loss of one hostage, was carried live on primetime British television and secured the future of the SAS, the army’s elite special-operations unit.

The previous day the U.K. had urged Arab diplomats in London to intervene with the hostage-takers “to lower the temperature.” That proposal was still being discussed at 7 p.m. on May 5 when the terrorists pushed the corpse of a hostage out of the door of the embassy.

A half-hour later, when the Syrian ambassador rang the U.K. Foreign Office to say the Arab meeting had ended, an official, listening to “explosions, gunfire and screams” down a phone line from the scene of the siege, told him he was too late.

At the time, 53 staff at the U.S. embassy in Tehran had been held hostage by Islamic students and militants for five months. Two weeks earlier, a U.S. attempt to rescue them had failed with the death of eight American soldiers. The records show Carrington and other European diplomats urging the U.S. at the time against further military rescue efforts.

Instead, Thatcher followed up the lifting of the siege in London by sending John Green, Britain’s ambassador to Iran, back to the country bearing a personal message from her to President Abolhassan Bani-Sadr. Green told Bani-Sadr the Americans weren’t aware of the U.K. approach and offered to visit Khomeini himself “to plead with him.”

The pleas came to nothing, and instead relations with Iran turned to wrangling over who should pay the estimated 790,000 pounds (then $1.85 million) to repair damage done to the London embassy during the raid.

Meanwhile, the Foreign Office began to prepare for possible requests from foreign governments to lend them the SAS. It was agreed that the elite forces would need a “pro-forma agreement” offering “immunity from prosecution and all claims in the event of causing casualties.” The archives show wrangling between the Foreign Office and the defense ministry about which department should bear the cost of such operations.

As the 1980 U.S. election approached, U.K. diplomats had their doubts about whether Reagan, the frontrunner at the start of the year, could last the course.

“At his age a faster pace will be more difficult,” one wrote, adding that Democrats had told him George H.W. Bush would “likely turn out to be a much tougher competitor than Reagan.”

Ambassador Nicholas Henderson, in a note to Carrington, summed up Bush as “a man with many of the qualifications for the presidency and without any overriding flaw. He cannot be described as outstanding in character or intellect.”

In a Feb. 8 note on Reagan, an official, Stephen Wall, noted the candidate had just turned 69 and highlighted his “slips of the tongue” and “more egregious errors,” such as the suggestion “that the proper response to the Soviet invasion of Afghanistan should be a new U.S. blockade of Cuba.”

Through the files, the consistent concern about Reagan was, in Henderson’s words, “whether he possesses the mental vitality and political vision” to govern. Descriptions include “caveman approach to foreign and defense policy,” “not an original thinker,” and “not a great man for detail.”

In May, Wall concluded of Reagan that “properly briefed, he would hold his own, e.g. in meetings with his fellow Western heads of government. He might not be a great president, but he would be a competent president.”

On foreign policy, Wall said, “Reagan will not look for confrontation. He is not trigger-happy.”

The archive also offers insights into ministers’ working practices. In February, Carrington complained that “few of his briefs conform to the instructions set out in Circular Home ‘B’ 52/79 of May 30 last year.”

This specified that “points to make” be in the form of “a staccato checklist on one side of one sheet of pink paper.” The foreign secretary found the format easier to read in a hurry.

Reuters: The Iranian president's remarks that the Holocaust was...