AFP: Iranian President Mahmoud Ahmadinejad criticised Western culture on Thursday, saying its people are “lost in a desert of lust,” and also took aim at his own country’s family-planning policy, the Ilna news agency reported. 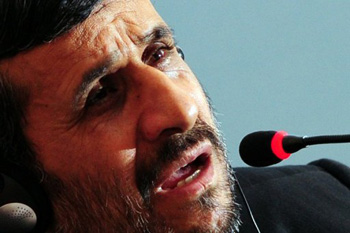 “We do not want man lost in the desert of lust but we want man up in heaven,” he was quoted as telling a group of provincial administrators in the central city of Yazd.

“The ‘two kids are enough’ motto belongs to the West’s humanist and liberal system that says ‘children are a nuisance, go have fun,'” he said of a nearly two-decade-old policy that encourages small families and makes contraceptives free of charge.

In recent years, Ahmadinejad has mocked the policy on several occasions.

“When we said two kids are not enough some opposed it. The two-kids-enough model destroys nations. What would happen in fifty years? The same thing that happened in Europe would befall us,” he said.

In 1993, Iran introduced population-control policies in response to the baby boom that followed the 1979 Islamic revolution, when Ayatollah Ruhollah Khomeini urged Iranians to have more kids.

Since then, the annual population growth rate has dipped to about 1.6 percent from 3.2 percent in the early 1980s, earning the country a United Nations award for the effectiveness of its programme.

Ahmadinejad insists Iran could comfortably more than double its population to 150 million people from the current estimate of 74 million, and called on Thursday for pursuing an “Iranian-Islamic model” of development.

“With this model we can conquer the whole world,” he said.

The Lady and the Veep

Newsweek: Condoleezza Rice has steered the administration back toward...

CNN: Syria, Iran and the militant group Hezbollah are...