Reuters: Iranian President Mahmoud Ahmadinejad has hit out at the heads of parliament and the judiciary, accusing them of “interfering” in his government’s business, media reported Wednesday. 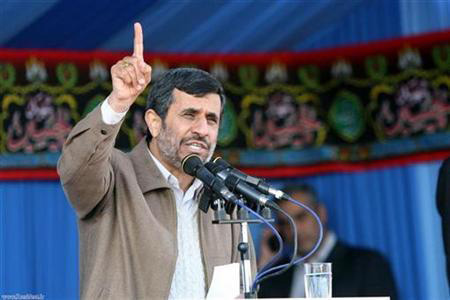 TEHRAN (Reuters) – Iranian President Mahmoud Ahmadinejad has hit out at the heads of parliament and the judiciary, accusing them of “interfering” in his government’s business, media reported Wednesday.

Ahmadinejad’s latest attack on fellow conservatives who run the Islamic Republic came in a letter to parliament whose leadership, he said, “insists on limiting the executive power’s legal authority and interfering in some parts of its duties.”

The letter, reprinted in many newspapers Wednesday, ramped up the hostility in a long running row between Ahmadinejad and a parliament which has accused him of trampling its rights and seeking to accrue more power for himself.

It also aimed a blow against prominent figures who have used their posts to criticize the president: judiciary head Ayatollah Sadeq Larijani, his brother, parliament speaker Ali Larijani, and former President Akbar Hashemi Rafsanjani who heads the Expediency Council, a body which mediates in policy disputes.

Both Rafsanjani and Ali Larijani lost to Ahmadinejad in the 2005 election which swept the low-profile then Tehran mayor to power. Rafsanjani infuriated hardliners in 2009 by making comments sympathetic to opposition supporters who took part in massive street protests after Ahmadinejad’s re-election.

Parliamentarians, who have accused Ahmadinejad of being slow to submit national budgets for scrutiny and failing to disburse funds for projects such as the expansion of Tehran’s metro, rejected his criticisms.

“Such an attack is a pretext to cover up social problems and to overshadow serious economic weaknesses, especially in the production sector, whose problems are increasing day by day,” Ahmad Tavakoli, a prominent conservative lawmaker, said on his website.

“The president should have waited for the leader’s (Supreme Leader Ayatollah Ali Khamenei’s) viewpoint rather than starting a new political challenge,” he said.

Ahmadinejad said moves by parliament and the Expediency Council, to challenge some of his economic policies and to give parliament a veto on the appointment of the central bank governor, violated the constitution.

“(Those) efforts by the management of the Expediency Council and some of its members, like the parliament speaker and the judiciary head … are a clear innovation in changing the constitution and the way of the country’s management,” he wrote.

The Expediency Council arbitrates in disputes when another state body, the powerful 12-member Guardian Council which supervises legislation, declares the assembly’s decisions unconstitutional or not Islamic.

Ahmadinejad said the Expediency Council — whose membership includes the president himself, although he has not attended its meetings for almost two years — “tried to distort the clear authorities of the executive power.”

In-fighting within the right-wing ruling elite has become more apparent since the suppression of the opposition movement which took to the streets in the weeks and months after the June 2009 vote it says was rigged, a charge the government denies.

Khamenei, who has consistently supported Ahmadinejad, in August instructed the executive and legislative branches of government to stop squabbling.

“We are all one family and have one big mission. Administering the country is the focal point,” Ahmadinejad said after a meeting at the time with Ali Larijani, but hostilities continued, notably when he appointed his own foreign policy advisers, circumventing the Foreign Ministry.

KLM to cease flights to Iran in April

AP: KLM says the company will cancel its flights...

Iran and the missile defense imperative