AFP: Tehran has warned it will cut cultural ties with France if renowned Paris museum The Louvre fails to set up an exhibition of Persian artefacts in Iran as agreed, an official was Monday cited as saying. 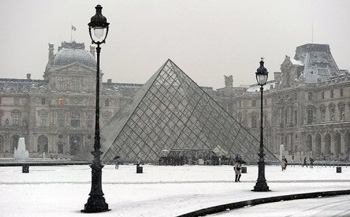 TEHRAN (AFP) — Tehran has warned it will cut cultural ties with France if renowned Paris museum The Louvre fails to set up an exhibition of Persian artefacts in Iran as agreed, an official was Monday cited as saying.

“If this museum (The Louvre) fails to fulfill its commitment with the (Iranian) Cultural Heritage Organisation in the next two months, then we will cut cultural ties with France,” head of the organisation Hamid Baghai was quoted as saying by Tehran Emrouz newspaper.

Under an agreement between Iran and France, “years ago we set up exhibits in The Louvre in exchange for them setting up their Persian artefacts here,” he said.

“But The Louvre officials did not take any steps. The officials at The Louvre have until the end of the 1389 (Iranian year ending March 2011) to precisely tell us when and what they are going to set up here,” he said, accusing the Paris museum of failing to keep its end of the bargain.

Baghai said one of the exhibitions set up by Iran in The Louvre pertained to the Safavids era (1501-1736) and the other depicts 10,000 years of Iran’s civilisation.

This is not the first time that Baghai has taken on a world-renowned museum.

In February 2010, he said Tehran had severed ties with the British Museum in protest at repeated delays in lending the Islamic republic the world-famous Cyrus Cylinder, a fragmented 2,600-year old clay item bearing a cuneiform inscription.

In April he was reported as demanding $300,000 in compensation over the delay by the British Museum.

The British Museum loaned Iran the Cyrus Cylinder in September 2010, bringing to an end the controversy over the ancient terracotta.

It was last shown in Iran in October 1971 during the reign of the former shah as part of commemorations marking 2,500 years of the Persian monarchy.

President Mahmoud Ahmadinejad personally inaugurated the exhibition of the Cyrus Cylinder at a ceremony in which he praised Iran’s pre-Islamic culture and heritage.

Many historians regard the Cyrus Cylinder, discovered in 1879, as the world’s first declaration of human rights. It was written at the order of Persian ruler Cyrus the Great after his conquest of Babylon in 539 BC.

Many of Persian artefacts dating back thousands of years can be seen across museums in Europe, the United States and Russia.

US Act to protect Iranian Dissidents at Camp Liberty

The US Congress has called on the US Government...