AFP: Western sanctions have done little to stop the flow of computers and software to Iran, where the real challenge for cyber surfers is getting around local censors who block thousands of websites, including Facebook and YouTube. 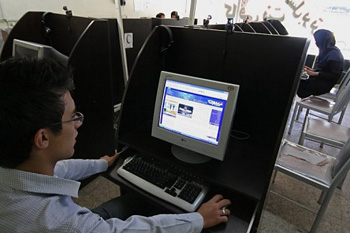 TEHRAN, February 3, 2011 (AFP) – Western sanctions have done little to stop the flow of computers and software to Iran, where the real challenge for cyber surfers is getting around local censors who block thousands of websites, including Facebook and YouTube.

Internet restrictions, enforced by rigid content-control software, aim to block access to what the Islamic regime dubs “immoral and destructive” material, including pornography and news websites critical of Iran.

Computer experts claim the crackdown on the Internet heightened after the controversial June 2009 presidential election, and has been tightened even more since the uprisings in the Arab world, which began in Tunisia in December.

“Since the revolt in Tunisia, subsequent mass protests in Jordan and now Egypt, I have noticed that anonymous surfing services (free proxy servers) are increasingly becoming inaccessible, while paid services have to re-route through several services, making them rather snail-paced,” said Milad, who asked that his last name not be used.

The 2009 presidential poll in Iran was a turning point when web restrictions became a weapon against an opposition movement that used the Internet to garner wide support against the government of President Mahmoud Ahmadinejad.

Many Internet browsers across the world still remember the online video of Neda Agha Soltan, who became an enduring symbol of the opposition movement after she was shot to death during a 2009 demonstration in Tehran, and the clip of her dying appeared on YouTube.

Despite restrictions, Internet usage has been on the rise in the Islamic republic, where 32 million people of the nearly 74 million population are regular net surfers.

There is also a thriving market for pirated software, computer games and Hollywood movies, which are often banned in Iran.

Thanks to zero copyright laws, pirated versions of movies, games and computer programmes are sometimes available in Iran within days of their launch in the United States — and at a fraction of their real sale price.

“We are the biggest consumers of pirated software in the Middle East,” said Milad, citing an example that an Adobe CS5 master collection sells for $2,359 on Amazon, but costs a mere $5 in Iran.

The flow of hardware into Iran is also unabated, despite UN and US sanctions against the Islamic republic over its controversial nuclear programme.

But that elicited little excitement, with many saying the programmes on offer were not very popular.

“Nobody really knows about Picasa. Earth is rather trendy, but is usually sold for offline use, while Chrome is not popular here,” said Hamid Reza, who owns a shop at central Tehran’s popular computer hub where pirated software is openly sold.

An Apple iPad, banned from direct sale in Iran under the sanctions, was sold at a slightly higher price in Tehran’s market less than a month after its launch last April in the United States.

“It would only take you a minute to figure out for yourself that we are not crippled by restrictions imposed by sanctions. The main headache is the filtering, although the painfully low Internet speed must not be forgotten,” Milad added.

“The greatest challenge for an Iranian Internet user is finding ways to beat the filtering and censorship,” said Milad.

To circumvent blockades, Iranians have adopted various techniques such as free solutions like Freegate and paid ones like the Virtual Private Network (VPN).

Speed fluctuations and intermittent breakdowns are other headaches for Iranian cyber surfers.

“Battling domestic censorship is now engraved within the definition of Internet experience in the Islamic republic,” said Faezeh, a 27-year old English teacher, who calls herself a Facebook and YouTube faithful.

“It is difficult to stay in touch in these modern times, and the few options we have are targeted by the government,” she said.